A visit to Malheur Wildlife Refuge

Last week the MulchMaids went to eastern Oregon, to one of their favorite places. Their destination, Malheur Wildlife Refuge, hosts hundreds of species of resident and migratory bird species. And it's also a beautiful and remote place to get away from city life for a little while.

What makes the refuge unique is the runoff from the Steens Mountain glaciers that feed the Donner und Blitzen River, even in summer. In the middle of this high desert country, refuge managers have created canals and dikes to control the river's water, filling ponds and wetlands to encourage and support wildlife in every season.

It's a birder's candy store.
The MulchMaids do love looking at birds, but are not very good at it. Suffice it to say the species they spot are always found in the "abundant" or "common" columns of the literature. But they have a great time looking. The place is so chock-full of wildlife it's hard not to see beautiful and exotic species of birds and other creatures all around. 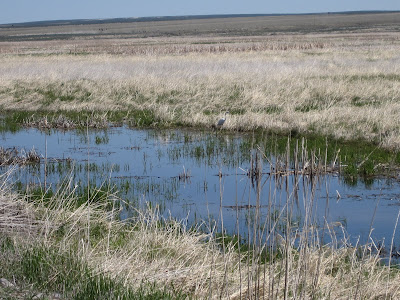 Look closely and in the center you'll see a Great egret wading at the edge of the pond. 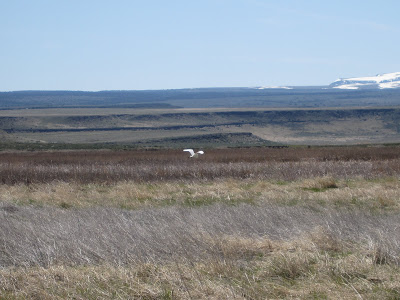 You can see a hint of the Steens on the right as he flies away. 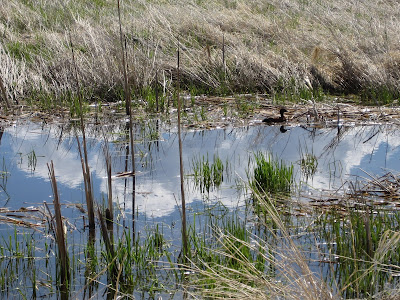 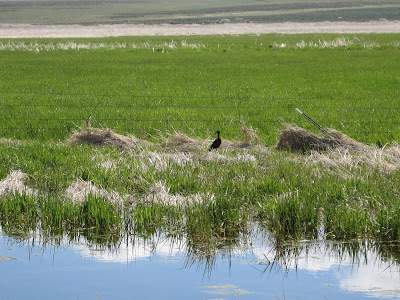 Common ibis. I don't know why he was alone since they generally feed in flocks. 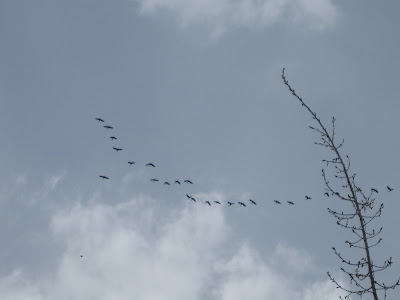 They fly in skeins like geese, but their individual profile is much slimmer. 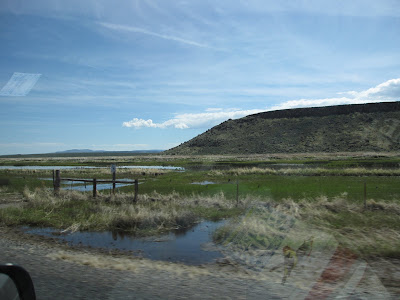 From the car at 60 MPH. Sorry about the bird-book reflection, but we were going too fast and it was too cold to open the window. 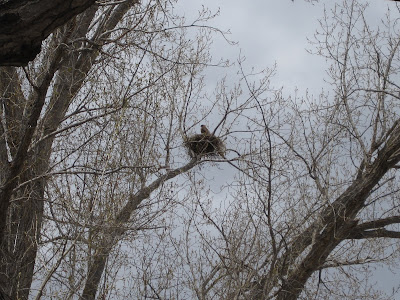 A Redtail hawk nest. Earlier, we saw an adult Redtail feeding a fledgling in the nest. There was a tiny bird we didn't identify flying in and out of the bottom of the hawk's nest where it had apparently made its own nest. 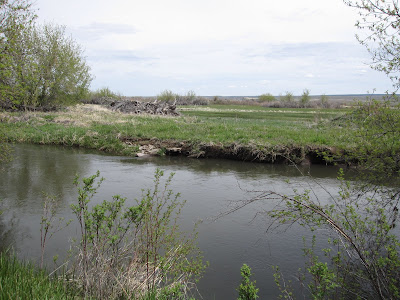 Along the Donner und Blitzen river. 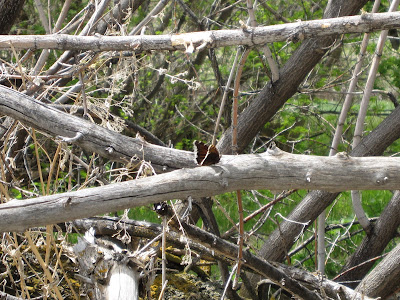 We saw lots of these butterflies. 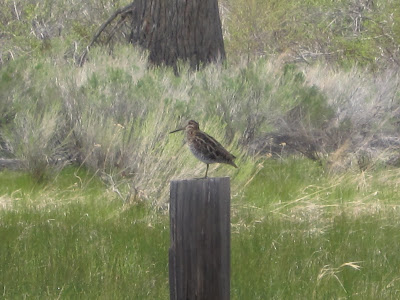 Common snipe (note the "common" - our specialty.) This noisy little bird stakes out a territory then perches on a post or pole to tell everyone else about it. 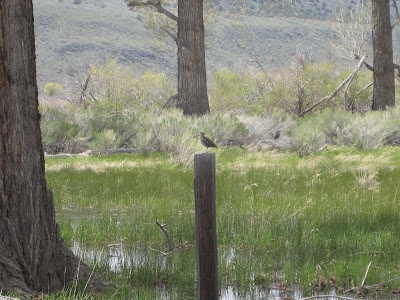 He's looking for love in all the right places. 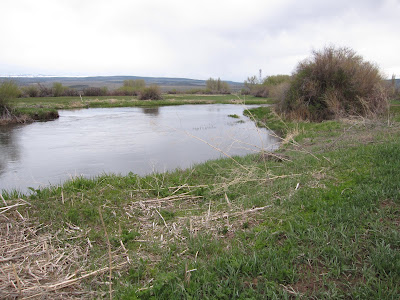 Another view of the river. 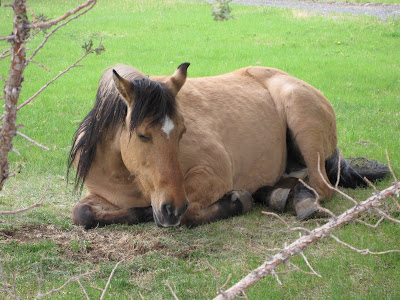 Star was the resident mustang behind our unit at the Steens Mountain Resort. He has the typical coloring of the Kiger mustangs that live on Steens: dark mane and tail, dark stripes across his legs and a dark stripe down his back. DNA testing shows the feral Kiger mustangs are very similar to Spanish mustangs from the 1600s, and are likely descended from horses brought here then. 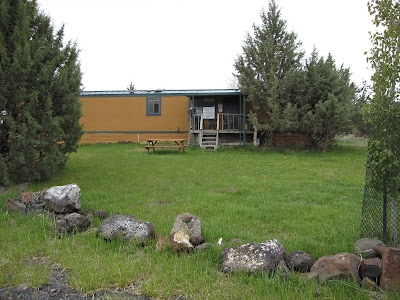 Our unit at the Steens Mountain Resort. As you can see, it was not what most would call a resort (which suited us just fine.)

In addition to the few birds I captured above, we spotted Great Horned owls (an adult feeding a youngster), turkey vultures, Wilson's warblers, multiple swift species, mallards, Common coots (there's that "common" again), and the cutest little weasel dancing down the road. 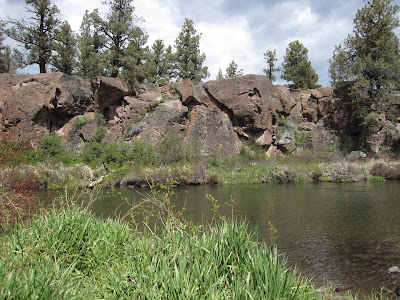 On our way there and back, we stopped at Tumalo State Park north of Bend for lunch. We got really lucky with the weather, so eating outdoors was perfect. 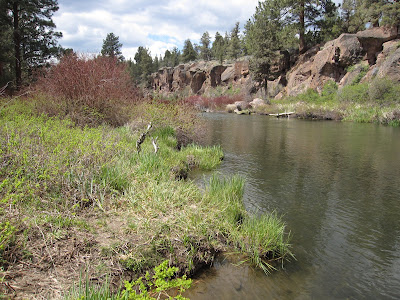 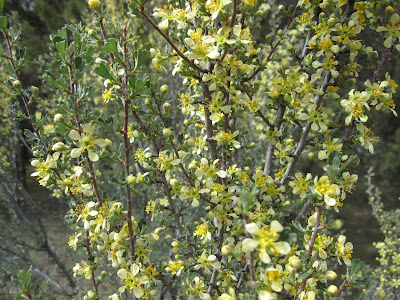 This shrub was blooming all over the park. 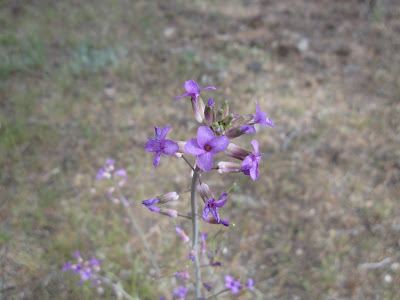 For a short trip, our visit to the Malheur wildlife refuge was amazingly rewarding. I recommend it to anyone who wants to get away, sooth their spirit and fill their eyes to the brim with beautiful images of the natural world.

Posted by MulchMaid at 8:06 AM