One of the challenges of gardening with a lot of evergreen plants - especially evergreen trees and shrubs - is the occasional heavy snowfall in winter. Because a lot of these plants don't naturally grow where snow is common, their evergreen canopies can hold a LOT of snow, which eventually bows down even the stoutest branches. 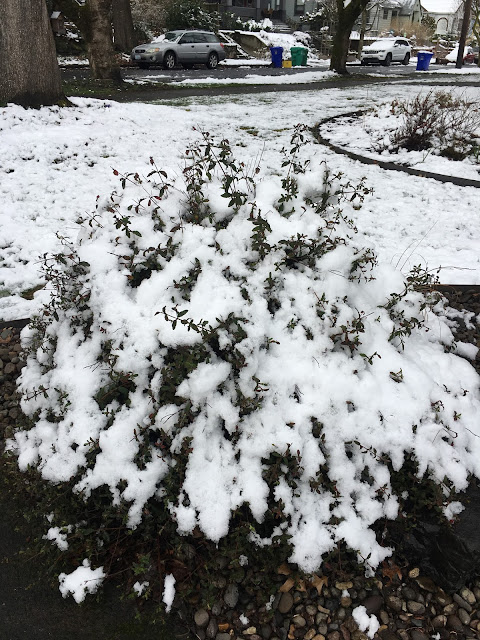 A big snowstorm hit last year, and the weight of that snow was the killing blow to a mature Ceanothus 'Victoria' and two Pinus contorta in the garden. This year, the snow was a little more clement in its quantity, but we did have probably three inches last night and I now have weeping varieties of some of my favorite plants. 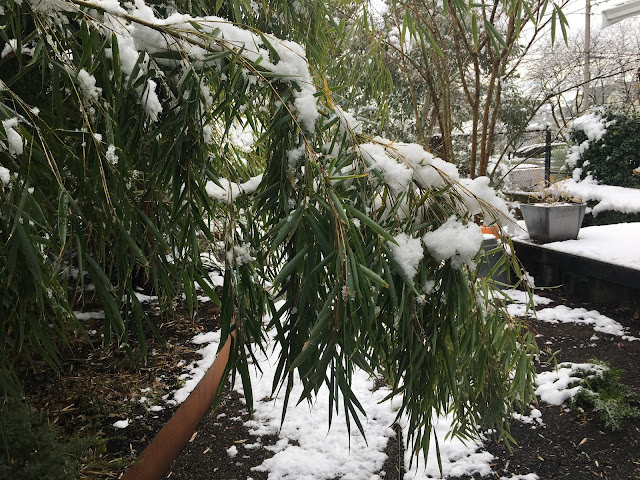 Here's what it looked like out my dining room window first thing this morning. I had gone around and shaken off the trees and shrubs last night, so what you see on the plants was all from the overnight snowfall. 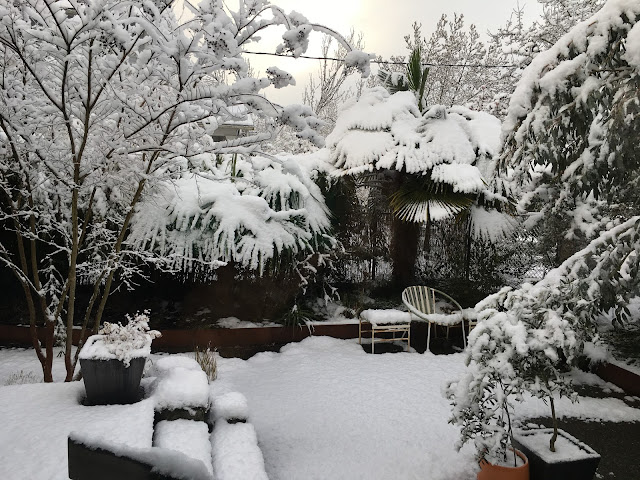 When I had a chance to get outside later this morning, I took these photos and then shook the plants off again. I hope this is it for our snow this season!

Eucalyptus pauciflora ssp debeuzevillei looks it's not going to bounce back from the weight on some of the slimmer branches. 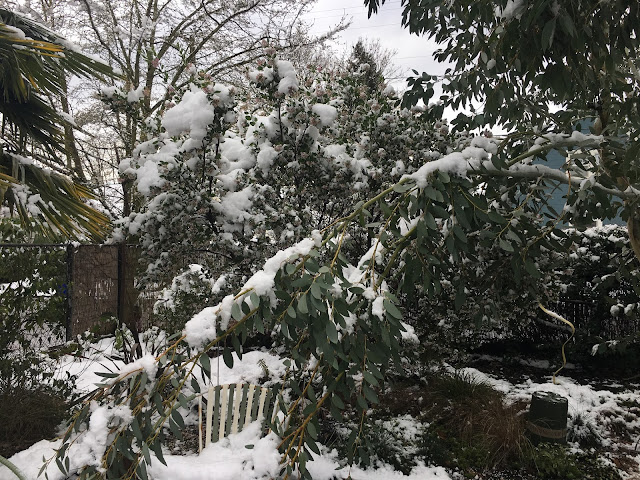 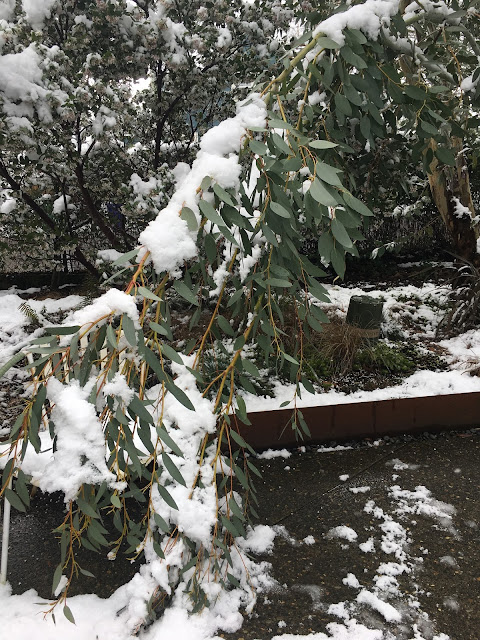 After shaking the snow off, I may as well use the opportunity to admire the young, colorful twigs up close. 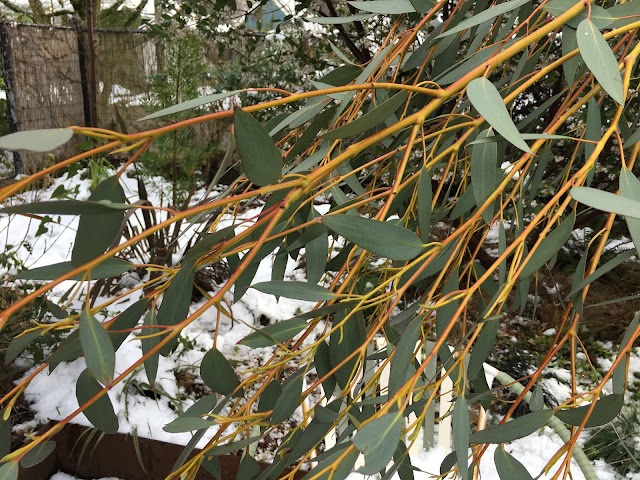 I decided not to try to protect the emerging buds of the hybrid Syneilesis aconitifolia. It will be interesting to see whether the cold and snow will damage them, or whether they will unfurl their odd, shredded leaves as usual. 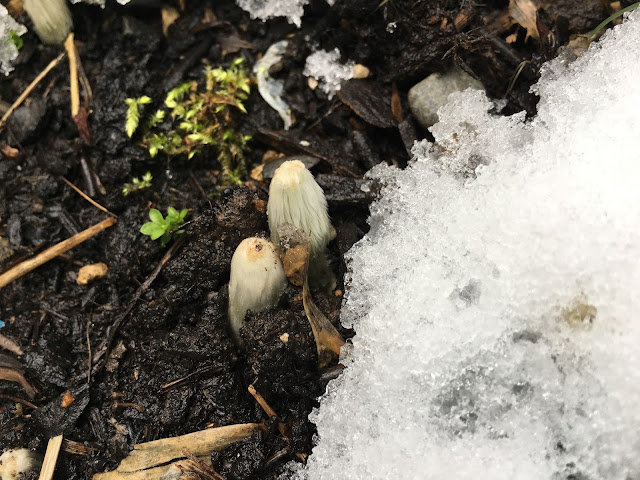 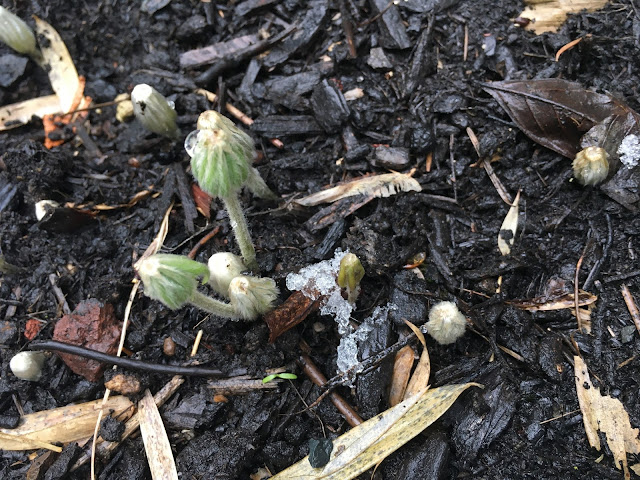 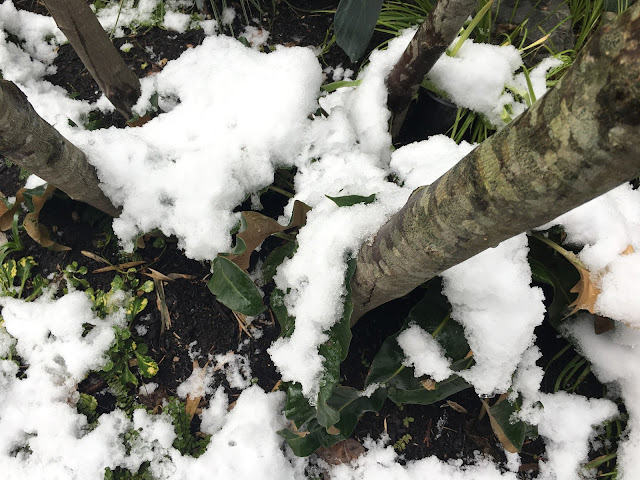 The potted NOID olive (I suspect 'Frantoio' or 'Leccino') was a little bowed, but bounced back when I gently shook it. 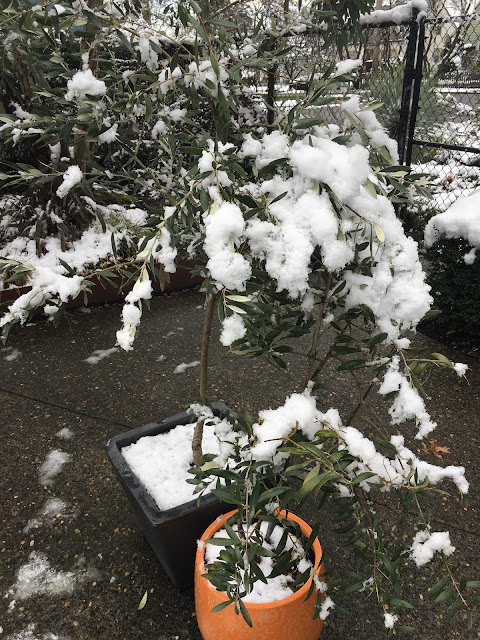 Not so encouraging for Podocarpus macrophyllus, which is still leaning more than before it snowed. I guess I may need to stake it again. 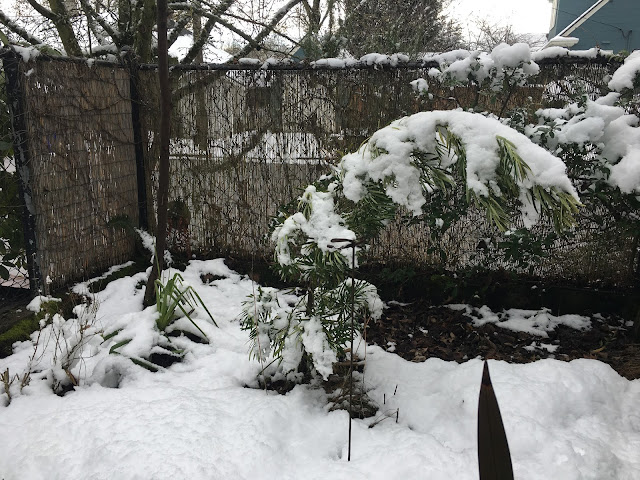 Here's a perky little Lewisia, looking like it was made for snow. 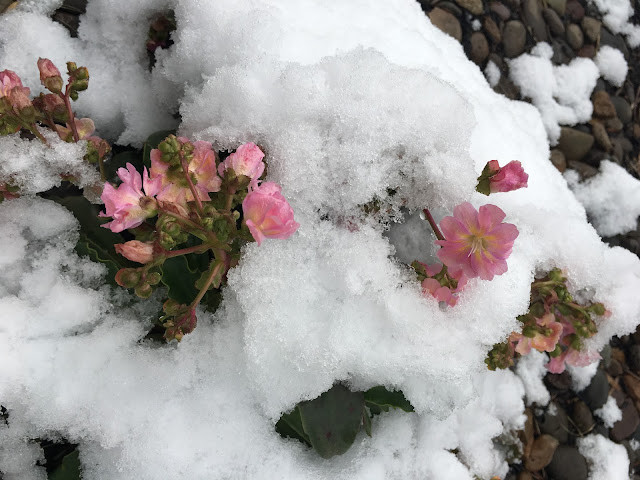 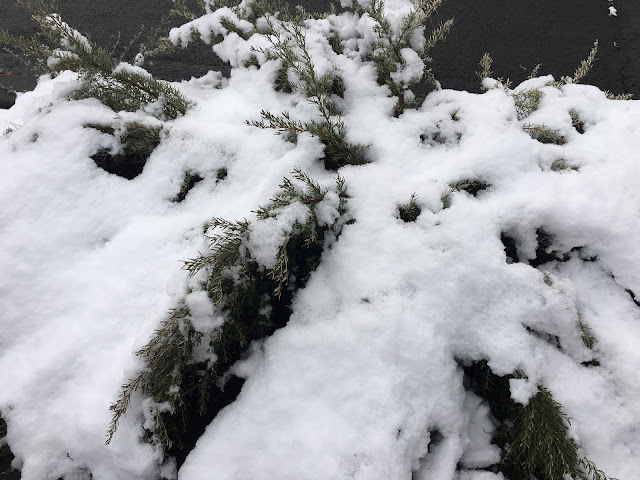 Back in the Northwest Territory, Azara microphylla and Pinus thunbergii 'Thunderhead' look fine after a dusting off. 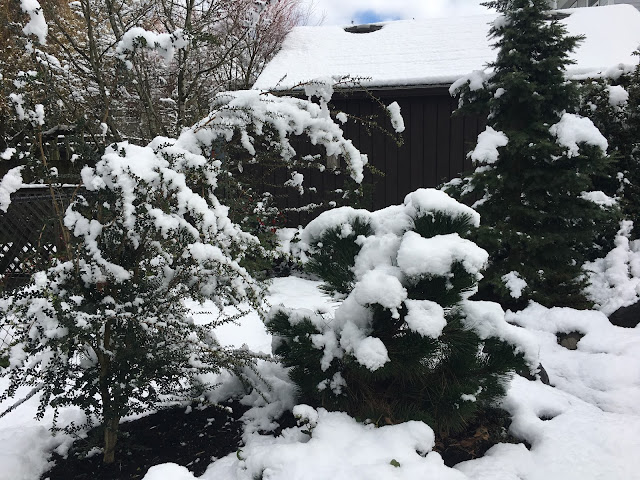 Ozmanthus heterophyllus 'Goshiki' is snug in a little snow cave. 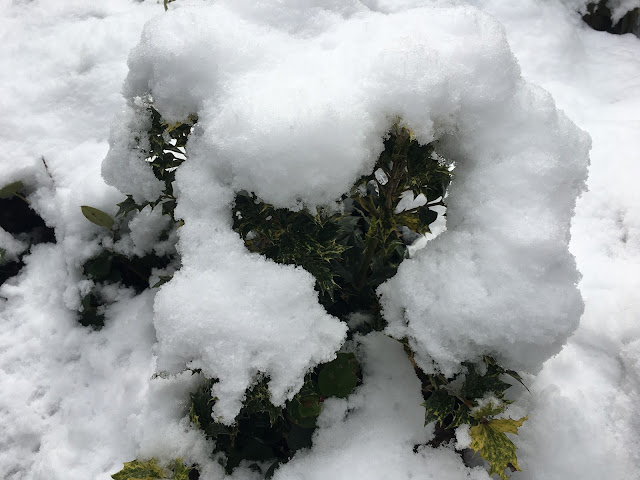 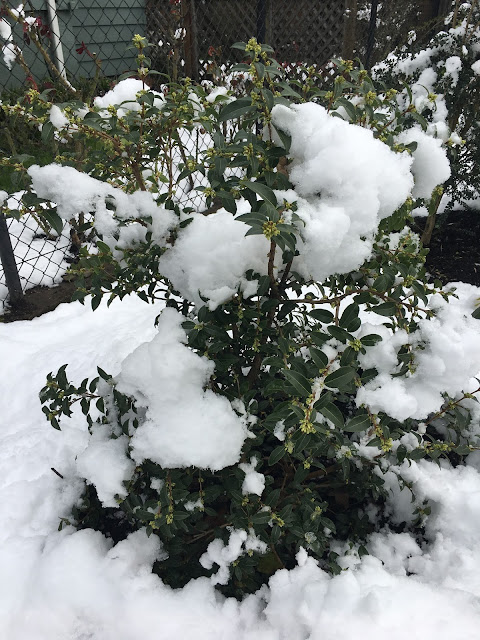 Ribes sanguineum is poking unperturbed through its snow cover with almost-open flower buds. 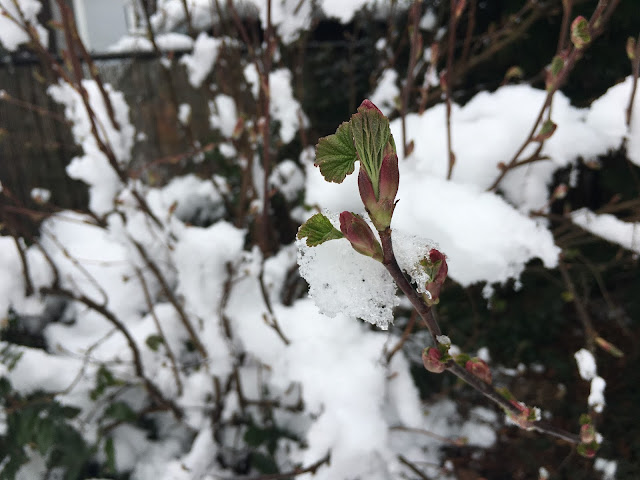 And Snowdrops clearly know the drill. 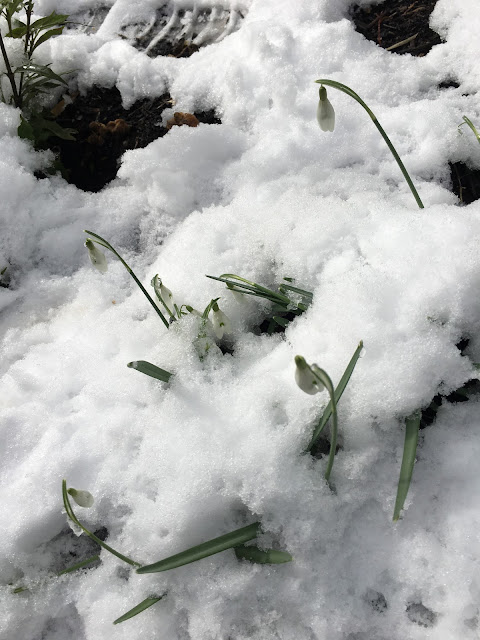 I'll leave you with the blossoms of Arctostaphylos 'Austin Griffiths', looking quite lovely in their snowy hat, as they take this year's snow load in stride. 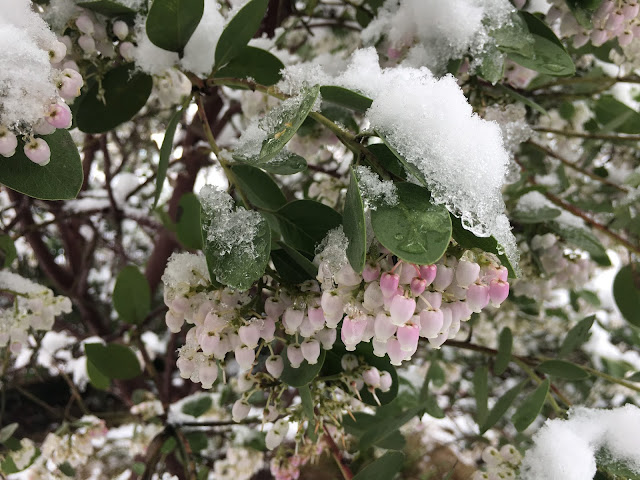