Cold and wet. That's April in a nutshell, so far. We expect that kind of weather in March, but April is supposed to let us be outdoors more - gardening, and even playing. It's just not that way this year, so I'm making the best of it by admiring the long bloom times this cold spring weather has promoted in a few species.

For example, Ribes sanguineum. It was just beginning to open for March Bloom Day. Now it's in full, glorious color, and feeding the hummers in my garden. I was seriously buzzed by a migratory Rufous hummingbird while taking these shots! 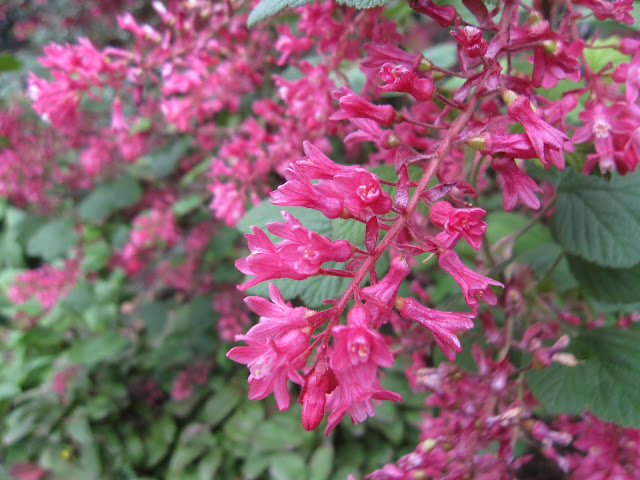 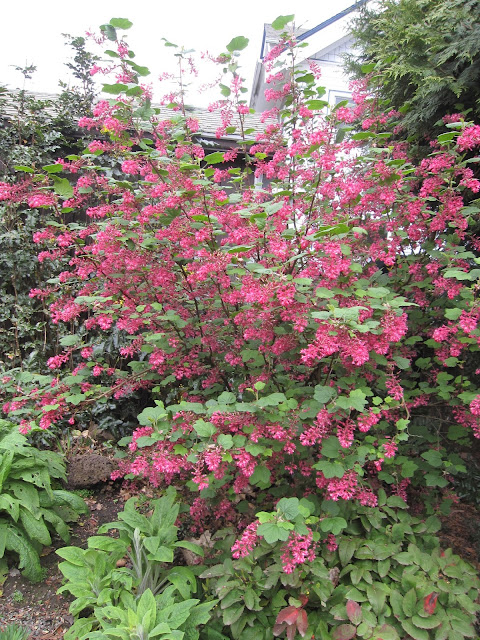 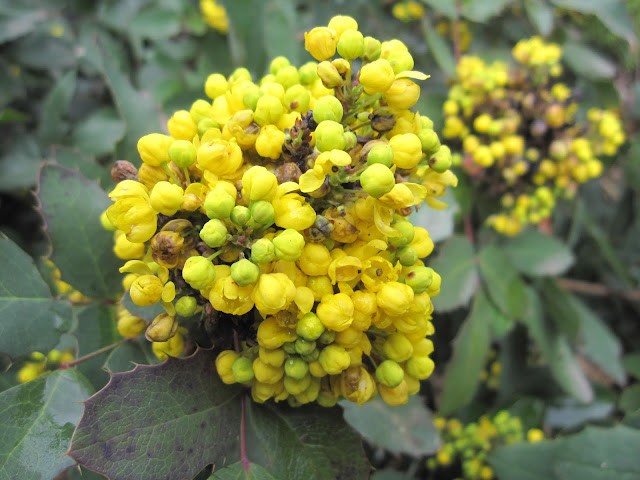 The last few flowers are clinging on to Osmanthus x burkwoodii. 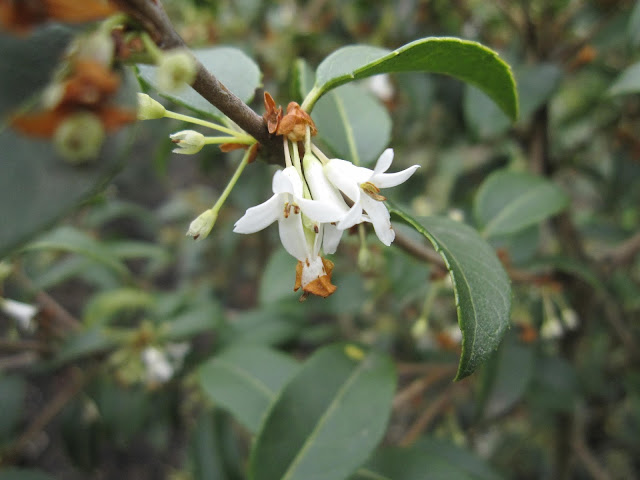 A few tiny flowers on Lewisia columbiana var. rupicola. The blooming plant is a volunteer seedling from the mother plant. Gotta love those freebies! 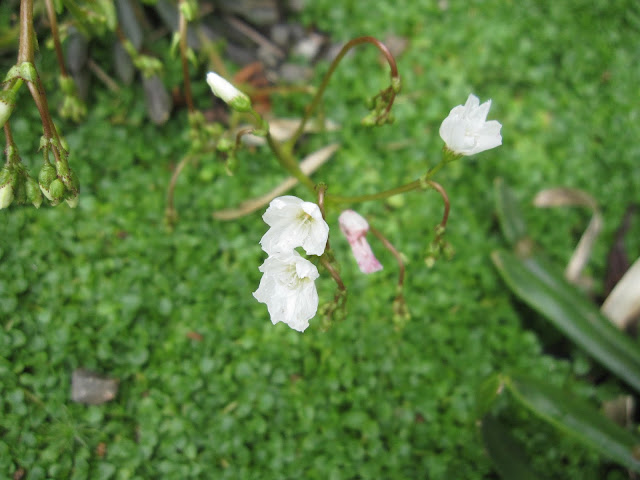 Not to be outdone, Lewisia cotyledon 'Sunset Series' is pulling out all the stops. 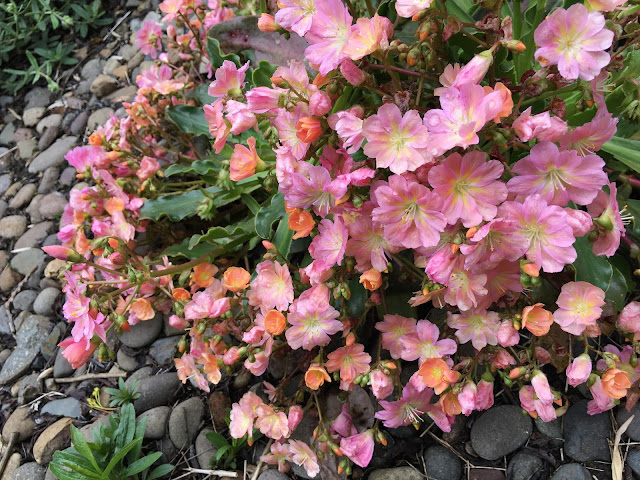 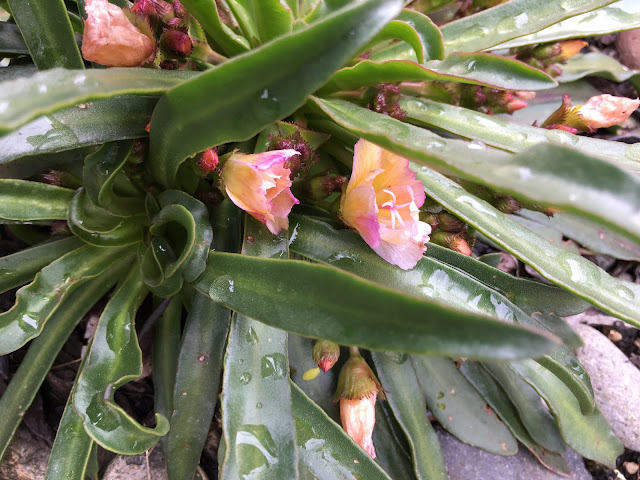 In more pink news, Loropetalum chinense var. rubrum 'Sizzling Pink' has many more blooms than last year. It was hit hard by snow and ice in 2017 but seems to have recovered nicely from the necessary pruning of a few boughs. 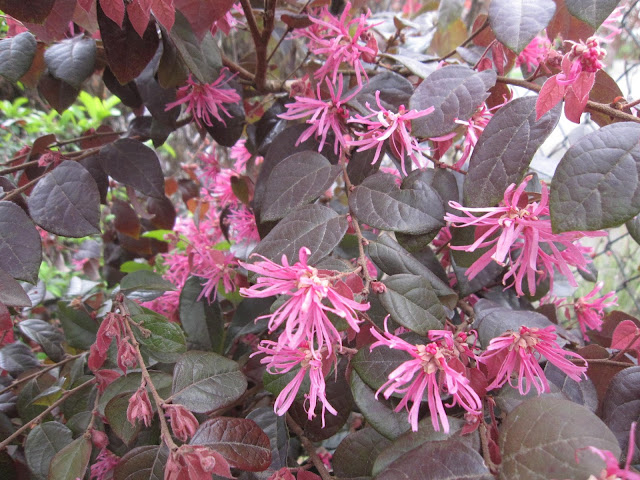 Last month I showed the very first bloom on Camellia x 'April Kiss'. Now she's hitting her stride. I'm not a big fan of most camellias, but this one got into the garden on account of perfect petal positioning. 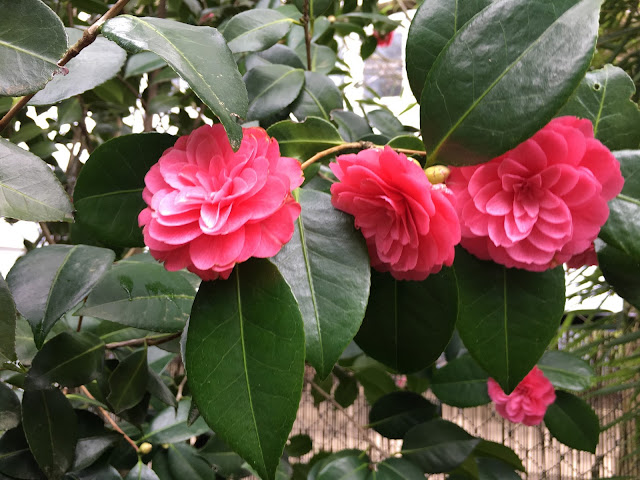 Malus 'Prairifire' is just beginning, but this looks to be a good year for the blooms. 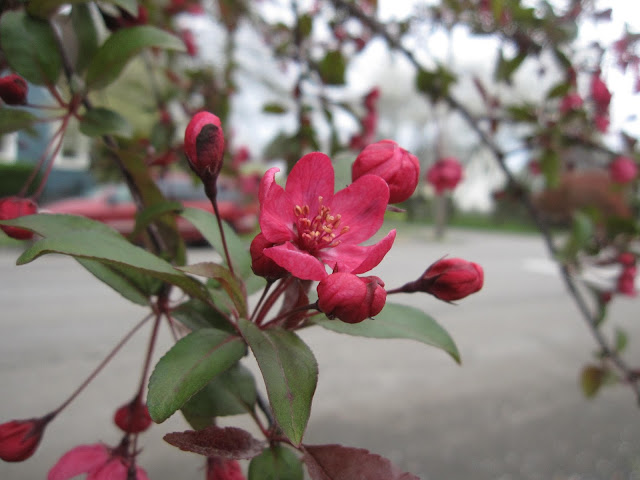 I'm in love with Grevillia australis. The long-lived, crazy little flowers, the ferny, evergreen foliage, and the attractive shape are topped off by its sweet, honey-like fragrance. It's the very best thing happening on my hell strip! 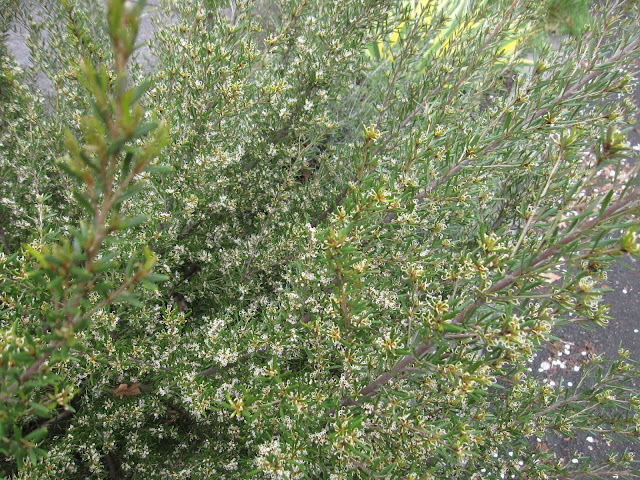 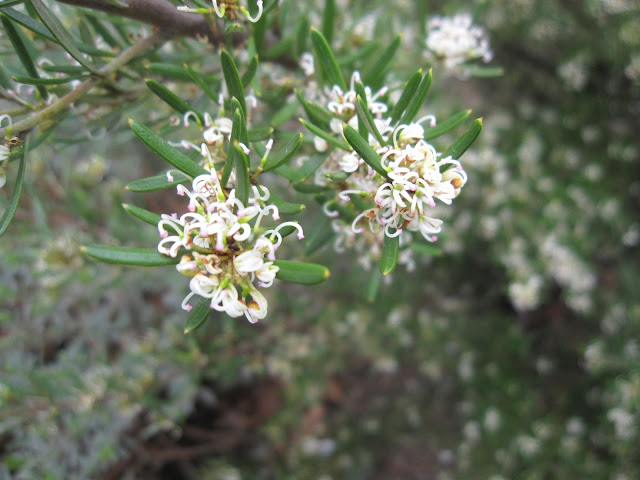 The later-blooming Manzanitas are coming along. This one was mis-labeled but is probably Arctostaphylos 'Martha Ewan'. 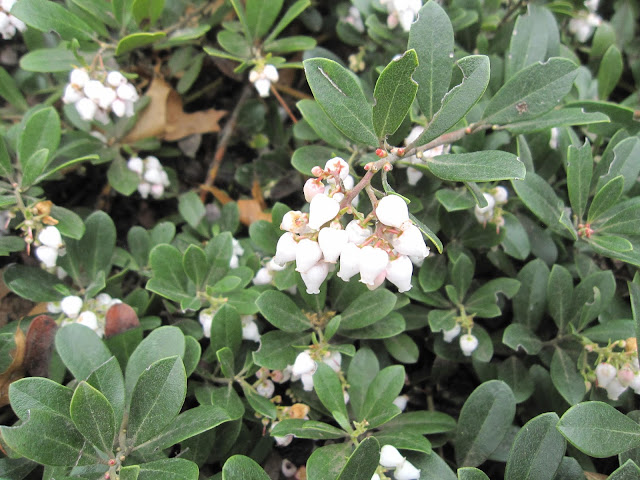 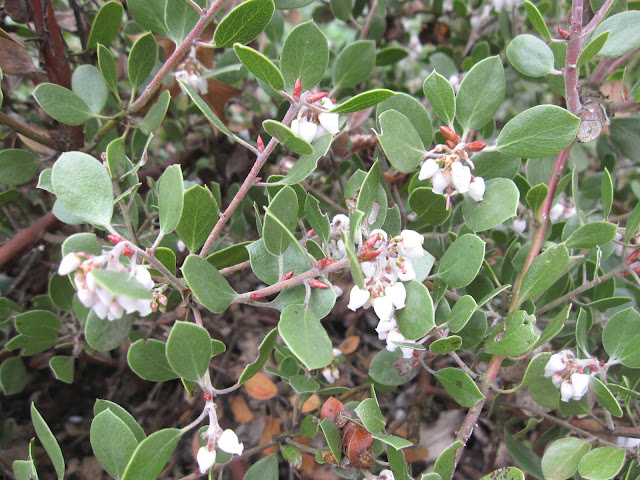 Dodecatheon hendersonii. This sweet wildflower is such a treat in the garden. 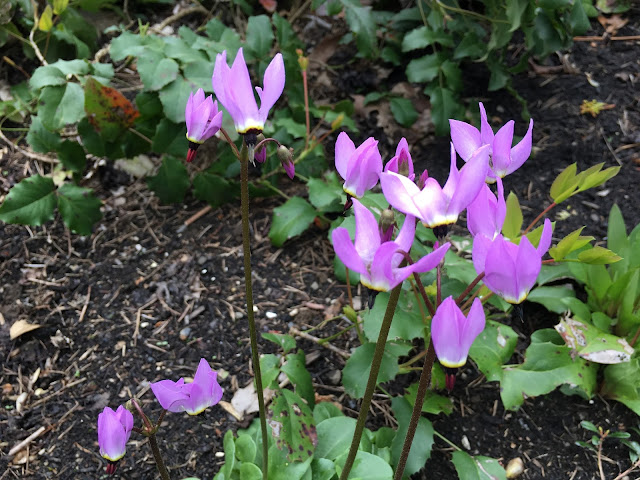 Ceanothus "Valley Violet' has had a rough couple of years. After clearly not liking her first location in the back garden, last spring she was transplanted into the hell strip where she proceeded to languish further, losing yet more branches. 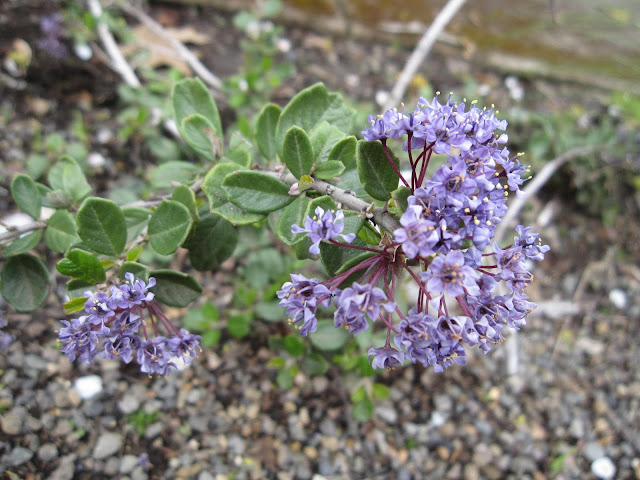 I thought I would lose her last year, but she made it through summer and winter. Time will tell whether I get to enjoy this pretty native from the Santa Barbara Botanical Garden in a happier, healthier mode. 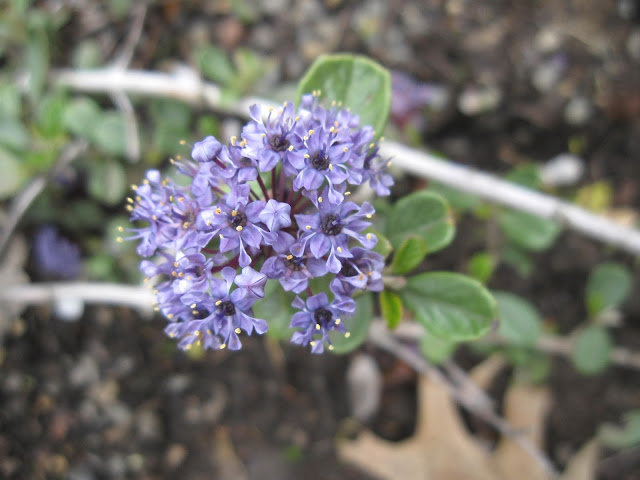 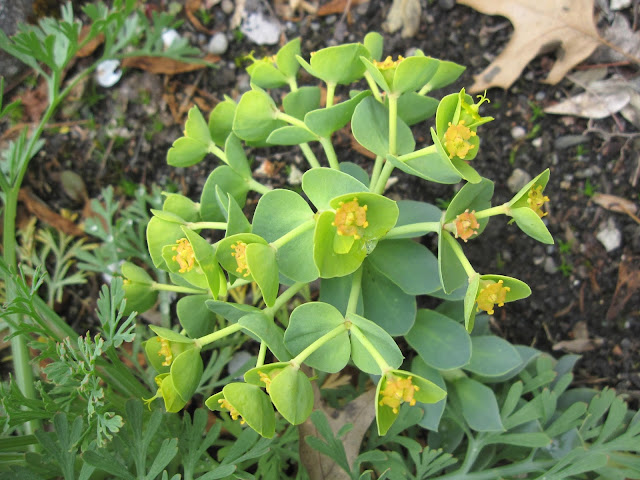 I've come later in life to an appreciation of Pieris. I used to think they were ubiquitous and boring, but I've begun to enjoy the intense red spring foliage on some, and on others like these P. japonica 'Prelude", their small stature that makes them work well as a front-of-the-bed plant. 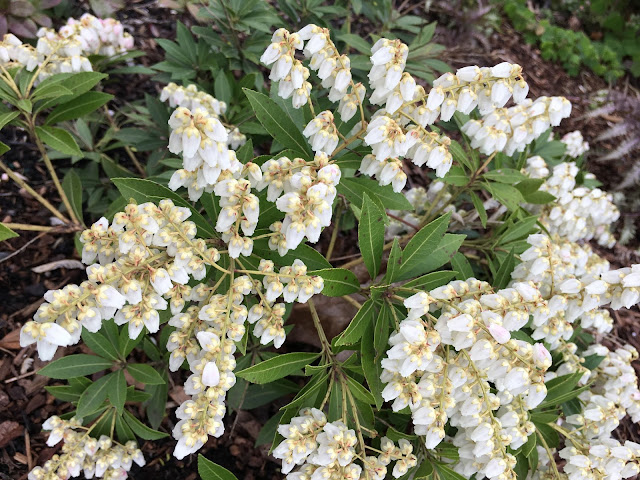 It wouldn't be spring without some Primroses, so here's Primula veris 'Sunset Shades'. I love this tiny hit of orange amid all the pinks and whites of spring. 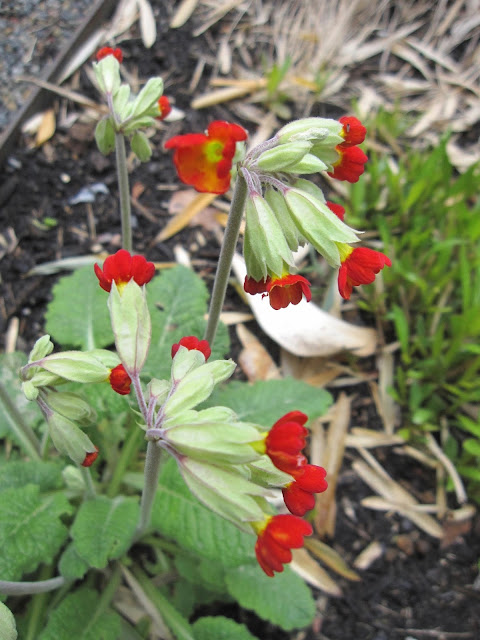 And we'll close out this Bloom Day post with a snowflake-shaped Primrose, P. sieboldii 'Late Snow'. 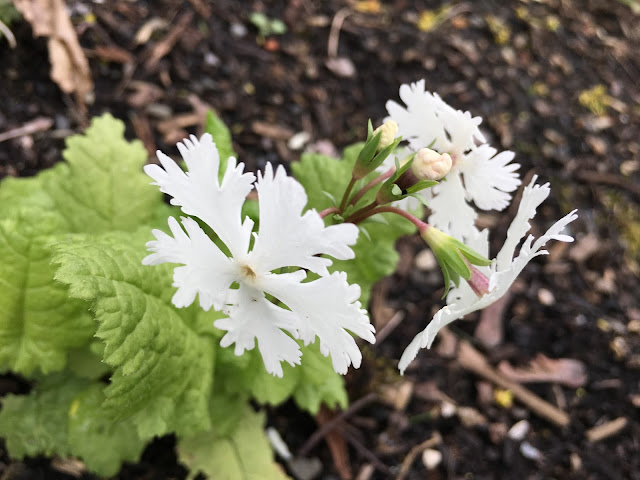