A (really) brief visit to Seattle

My first stop was the new-ish Central Branch of the Seattle Public Library. This way-cool building was designed by Rem Koolhaus and opened about seven years ago. 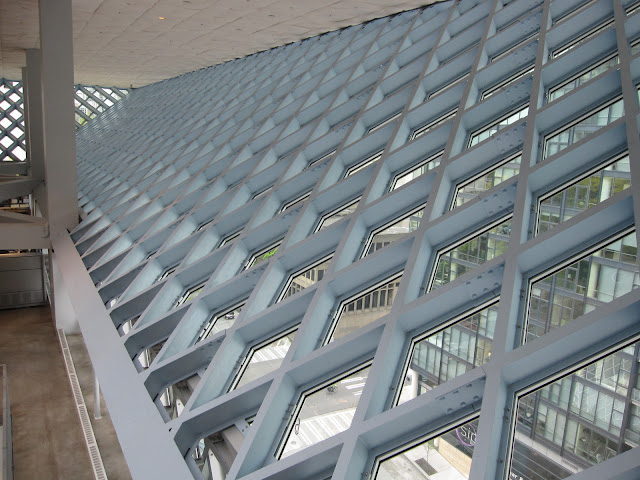 Its exterior is very unexpected, with diagonal grids on the faces and a squeezed middle section on several sides that's much narrower than the top or bottom of the building. You can see how that affects the interior in the shot above. 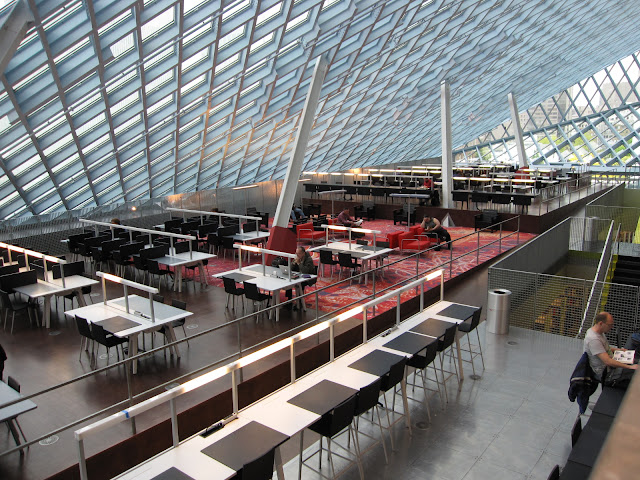 The interior spaces are huge, yet the whole building is surprisingly friendly and useable. There's a coffee shop on the main level and light everywhere — enough for an interior garden. 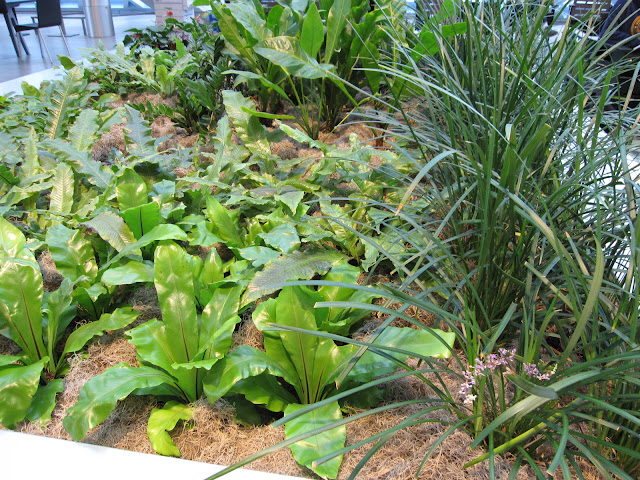 I think these plants were in pots under all that sphagnum moss, but the overall effect was pretty pleasing.

The exterior landscaping was limited, although they had incorporated a runoff recovery system that stored rain to water parts of the grounds. But as I left the building I saw this striking variegated cedar(?) It looks like Cedrus deodora 'Cream Puff', but it was full-sized. 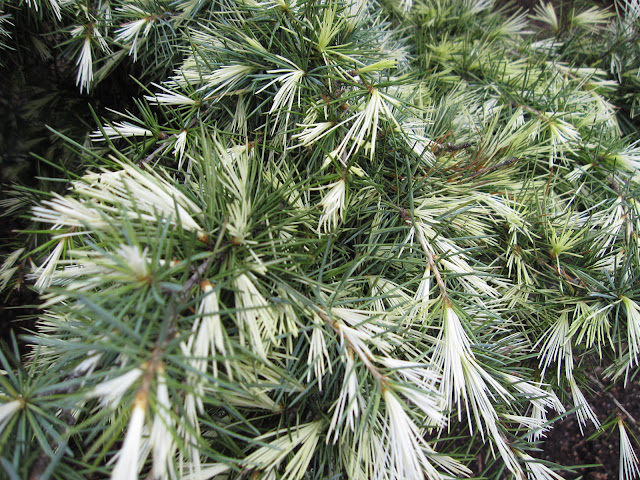 When I looked closer, I could see that the new growth was all white and the individual side needles were all dark green. I wonder if the color contrast disappears gradually through summer and fall. 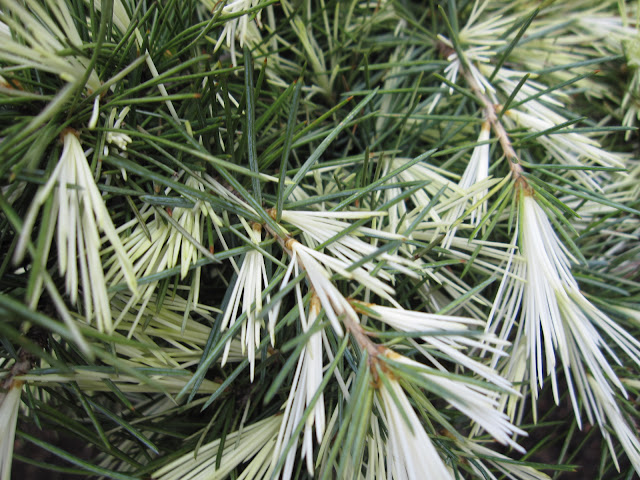 After heading south to Pioneer Square, I walked north along the waterfront from there. It was bright, but there was a strong wind blowing and I was glad I had worn a jacket. Along a fenced area I found this lone Cistus flower in bloom. 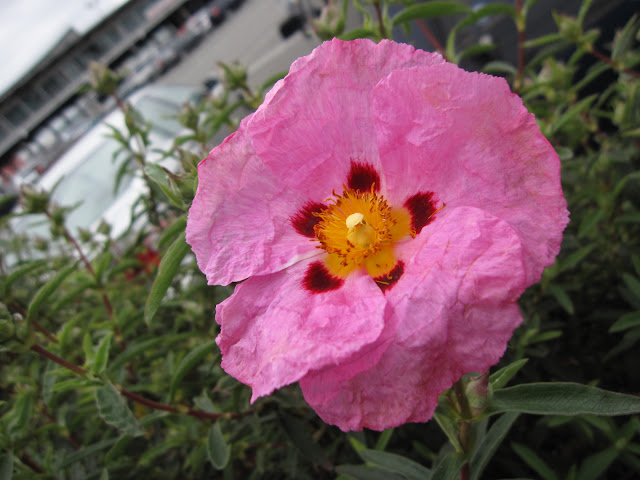 Winter had obviously gone easy on this shrub and it was making a break for downtown through the railing. 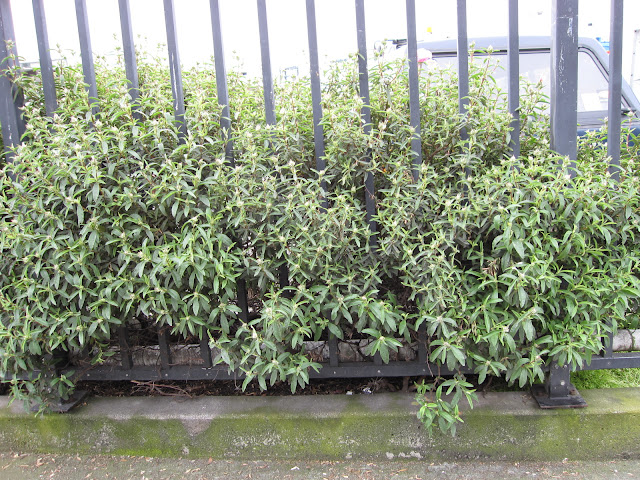 My goal had been the Olympic Sculpture Park, but I stopped at Pier 64 when I realized it would take me a while to get back to our appointed meeting spot. An overpass there takes pedestrians over the rail lines and back into downtown. At the base of the overpass stairs was this small planting area with what looks to me like a Vireya Rhododendron.  I thought they would be too tender to live outdoors, even in this somewhat protected spot. 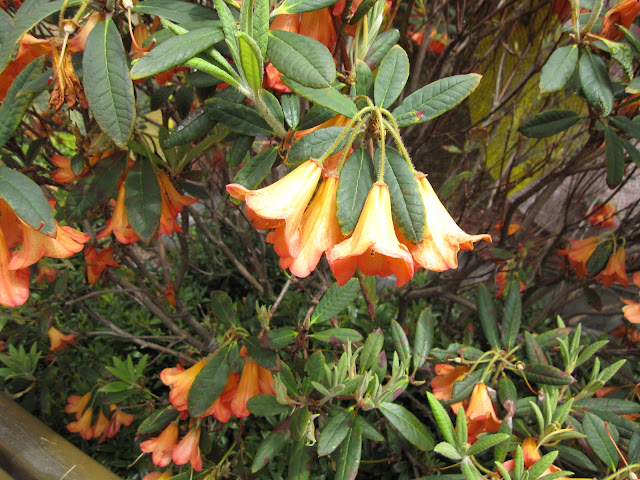 I loved the orange of its blossoms which complemented the mosaic on the stair walls beautifully. 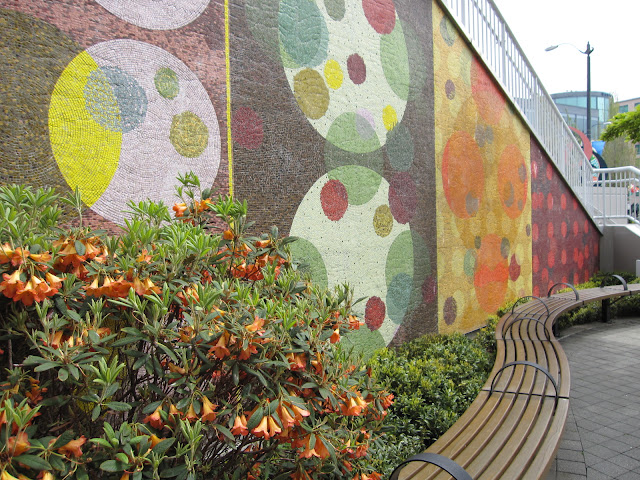 As I approached the building where I'd meet the Mulchman and a colleague we were transporting home, I spotted this simple but effective contrast. The pink and green of the Hellebore and the black of the Mondo grass were set off nicely by the gray aggregate wall. 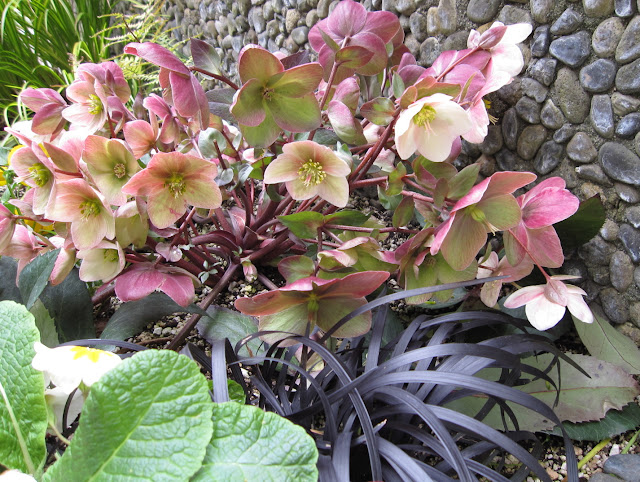 Three hours isn't much time in the city, but I would never miss an opportunity to explore our nearest big city neighbor. As it was, I got to cover a few miles on foot and I came home with a fresh perspective on a few plants and buildings in downtown Seattle.
Posted by MulchMaid at 4:00 PM