Foliage Follow-up in the Northwest Territory

It's no secret that my gardening style is pretty different from that of my husband (aka the Mulch Man).  In his area of our back garden, he is focused on recreating the lush, green Pacific Northwest look he fell for when he moved here from California back in the 80s. It has been a gradual process with several partial re-dos over the past few years, but the layout is finally working to his satisfaction.

A month ago, we made some last tweaks to the beds and paths, and this past Saturday (taking advantage of our rainy Friday) we planted out all the residents from the Northwest Territory temporary nursery into the beds. 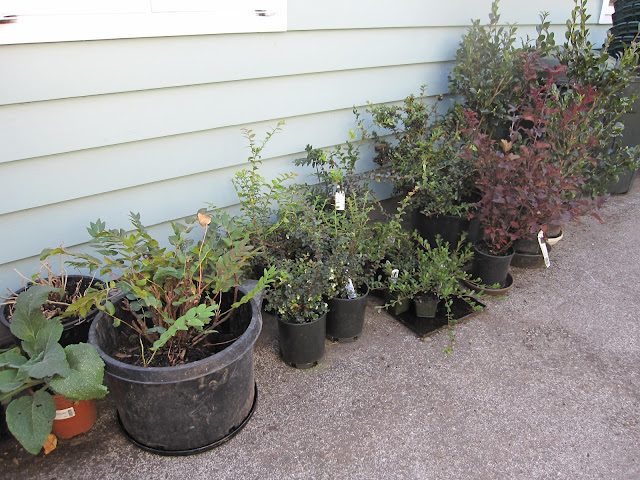 It's all about the foliage. We now have a total of eight huckleberries (Vaccinium ovatum and V. ovatum 'Thunderbird'.) 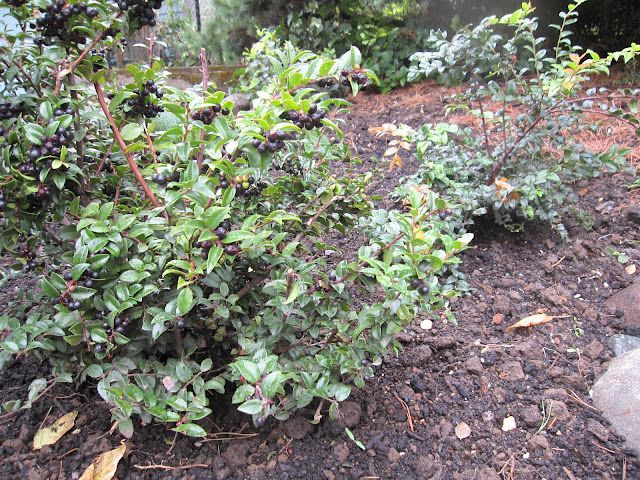 The established huckleberries are full of glossy berries that contrast with the shiny leaves. 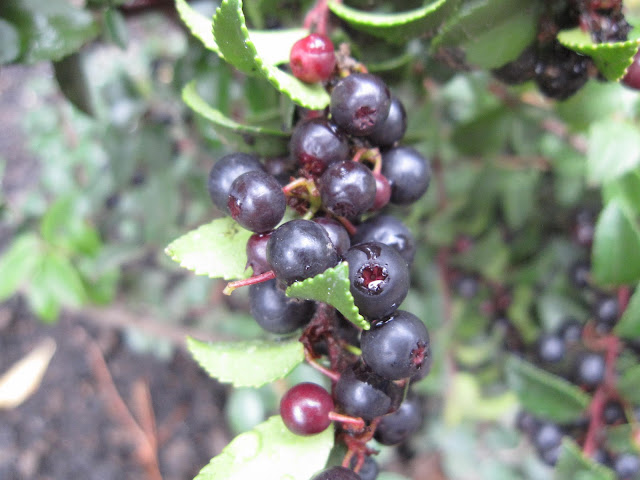 I can't count the number of Bearberry (Arctostaphylos uva ursi) we now have, both the established ones and eight new ones. 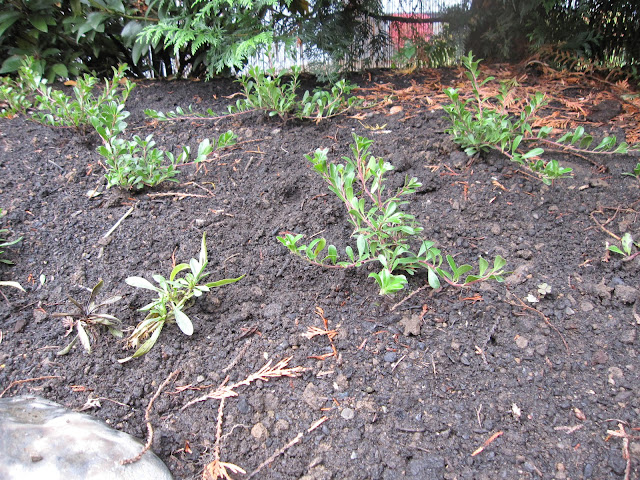 We moved some plants around, including this Mahonia nervosa.  It didn't appreciate the amount of hot sun it was getting  in late afternoon. The foxgloves aren't Northwest natives, but they have naturalized in the wild so we enjoy them in the Territory garden, too. 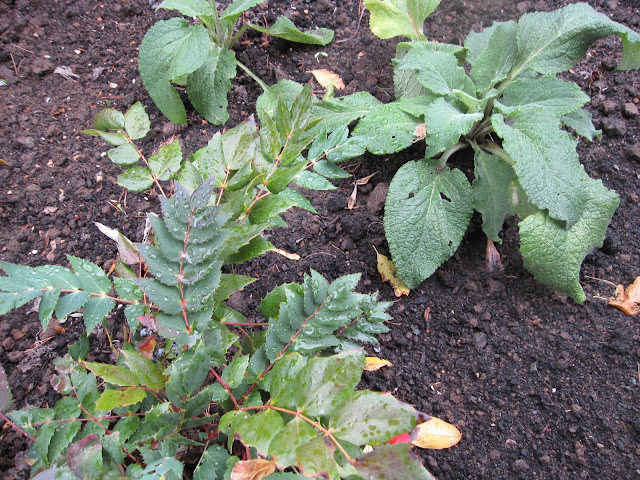 The Mahonia foliage is getting that pretty purple coloration. I think it's partly from autumn, partly from sun stress and partly from being in a holding pot for a month. 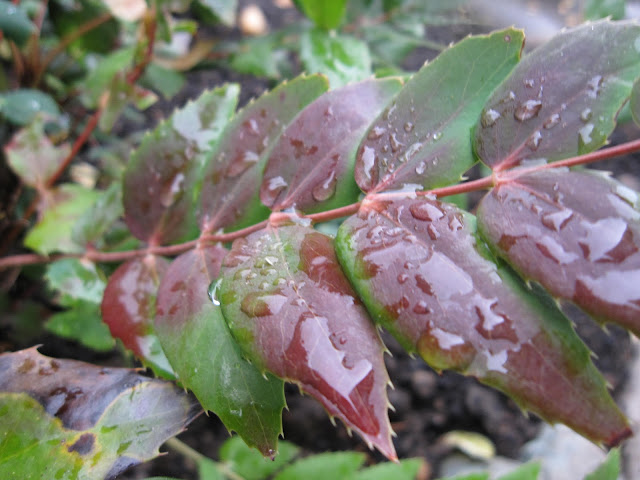 We moved a few small forbs to places where we can appreciate them better. Here are Iris tenax, I. x pacifica 'This Ring' and Sisyrinchium bellum 'Rocky Point' (I believe). I can tell the genus apart, but when they're not flowering, I'm not sure on IDing the species. 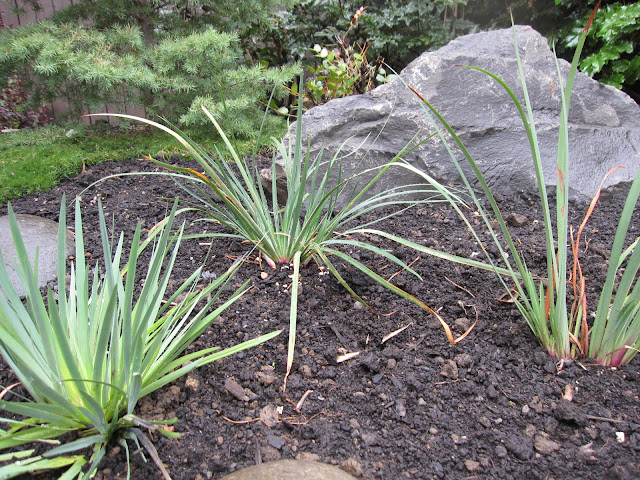 We took out three 'Winter's Snowman' Camellias, because they just weren't doing the job in creating a privacy screen in the northeast corner of our back garden. To replace them, the Mulch Man decided on three Camellia sasanqua 'Yuletide".  It's tricky to find an evergreen shrub that can withstand that area where they get no morning sun but bake in the late afternoon. 'Yuletide' were reliable and healthy in our last garden so we're giving them a try. That's a couple more huckleberries out in front of them, and our neighbor's blueberries in seasonal color behind the fence. 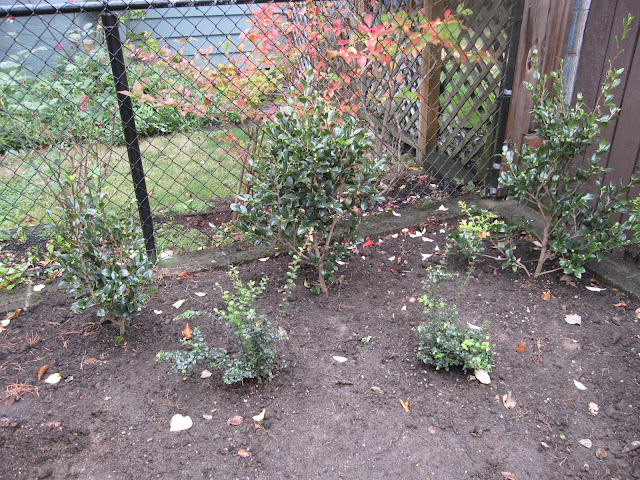 It will take the camellias some years to get to any size, but the denser habit of 'Yuletide' is much better for the job of screening. 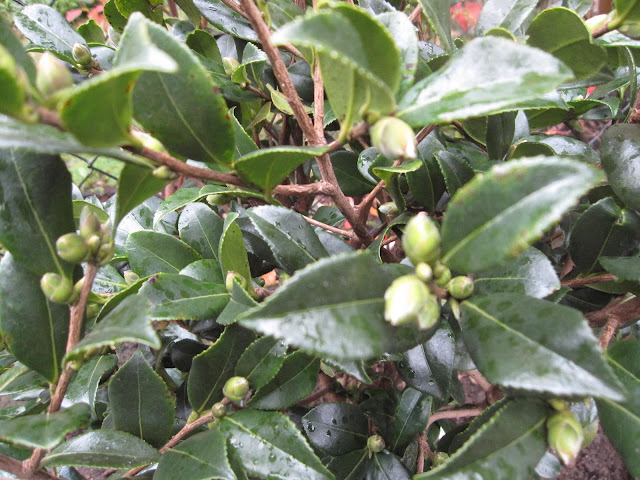 A hybrid of the native Eastern Ninebark, Physocarpus opulifolius 'Summer Wine' adds a colorful note behind the Mountain  Hemlock and will grow fairly quickly. 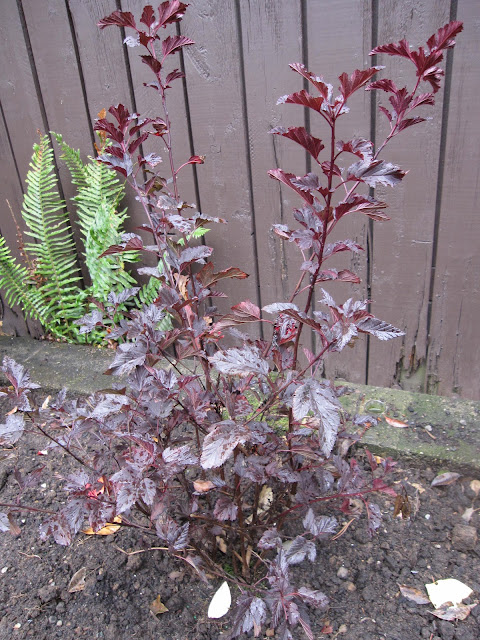 It's hard to start over in an area that was recently green with shrubs, even if the overall result wasn't what we were looking for. But as I look at the space I try to imagine it in just a few years, filled with glossy, healthy foliage that beautifully screens us from the neighbors.  I think it will complete the Northwest Territory and add a nice twist of Pacific Rim. And there's still lots of room for more foliage this spring! 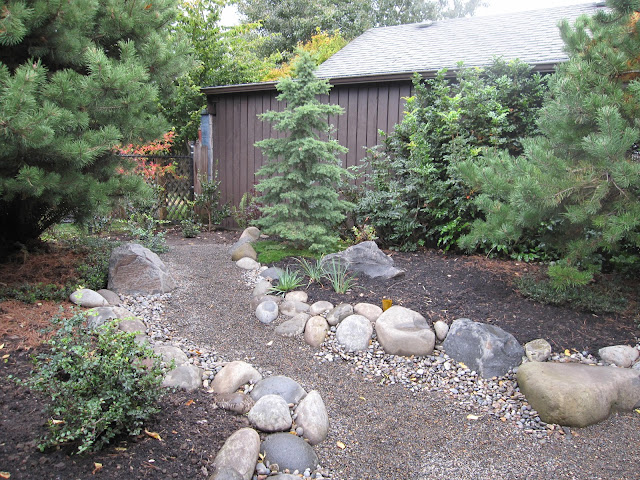 Foliage Follow-up is hosted by Pam at Digging. Pay her a visit to see other foliage stories for October.

Posted by MulchMaid at 2:11 PM