Although I had originally planned to attend the ANLD tour on Saturday, when I looked at the locations they were all more remote than this city-dweller was really interested in negotiating solo. My sense of direction is limited, and frankly, I doubted my ability to find more than a couple of them within the tour time frame.

I turned instead to the 2013 Open Gardens publication from HPSO. Open Gardens are arguably one of the best benefits of membership in the Hardy Plant Society of Oregon. This past weekend, for example, I could have chosen from over ten member open gardens on either Saturday or Sunday, and a smattering on the following Monday evening. 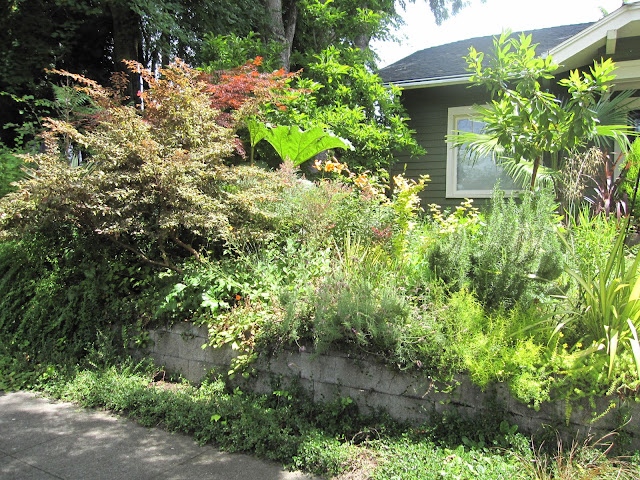 I found the perfect garden to visit that day: I could walk to it, it sounded interestingly eclectic, and, although an expansive suburban garden is a pleasure to explore, I'm always interested to see how and what gardeners can accomplish on the more modest Portland city lot (or two, as in this case.) 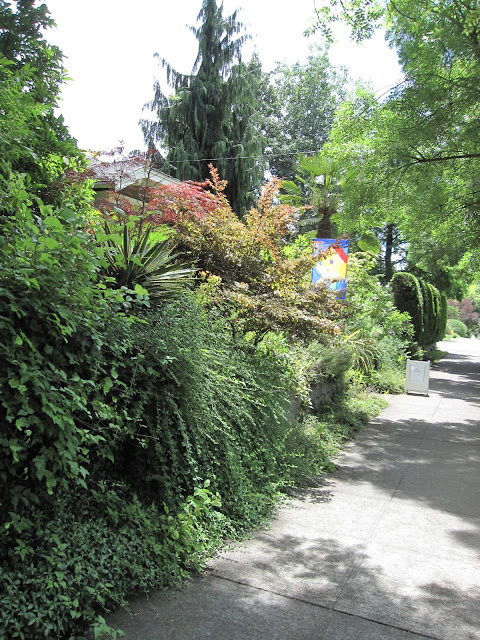 It was a warm and sunny day, so I apologize that my pictures are almost uniformly burned out. You may want to put on your sunglasses for the remainder of the tour. 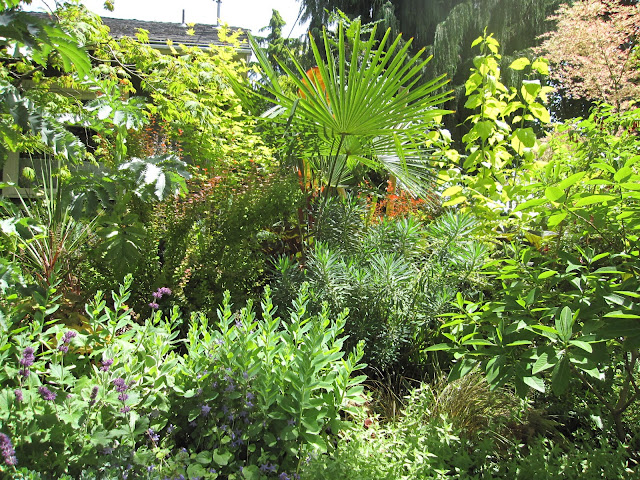 The creators of this lush garden are Peter Eastman and Dayrol Griffin. The home had belonged to Dayrol's parents and he talked a little bit about living behind North Mississippi Street before it became a shopping and dining destination. Suffice it to say, the neighborhood has changed a lot in the twenty years they have lived and gardened here.

Lots of tropical-feeling plants visible from the street dominated the small front garden, including this blooming Melianthus major. 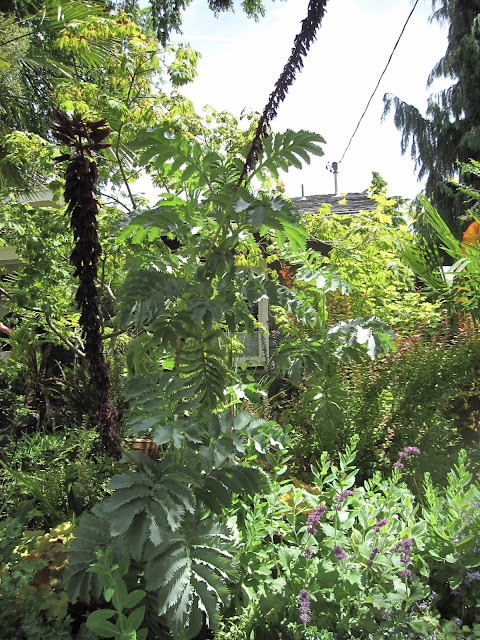 Up the front steps were more tropicals, including a Gunnera, and a burbling fountain that I'm sure helps to dampen the nearby I-5 freeway and Mississippi street noise. 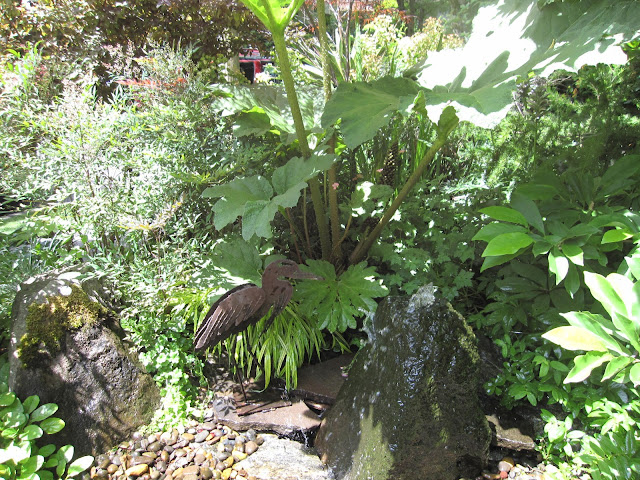 Multiple Trachycarpus fortunei had self-propagated from older palms planted in the back garden, then carefully replanted by the gardeners. 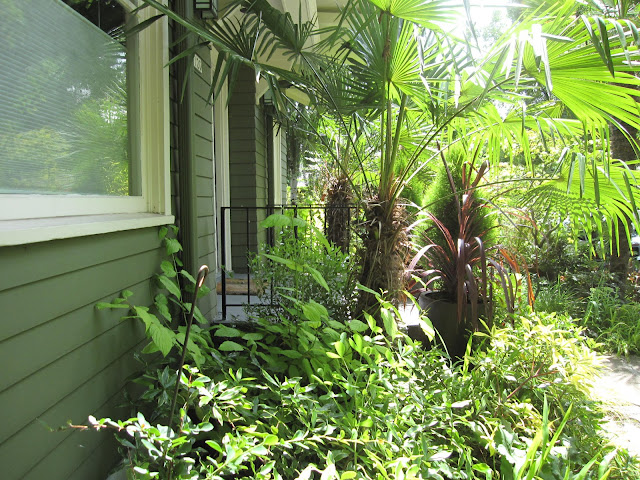 Entering the back garden one was warned to close the gate to prevent two sweet French bulldogs from leaving. Unfortunately, I failed to get a picture of the other cute and diminutive residents. 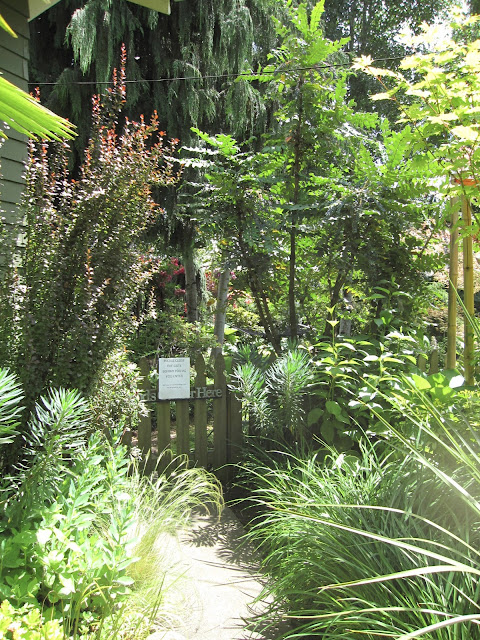 Inside the south gate was a small shady lawn area surrounded by beds, and watched over by a tall cedar. Peter characterized this area as their Northwest garden. 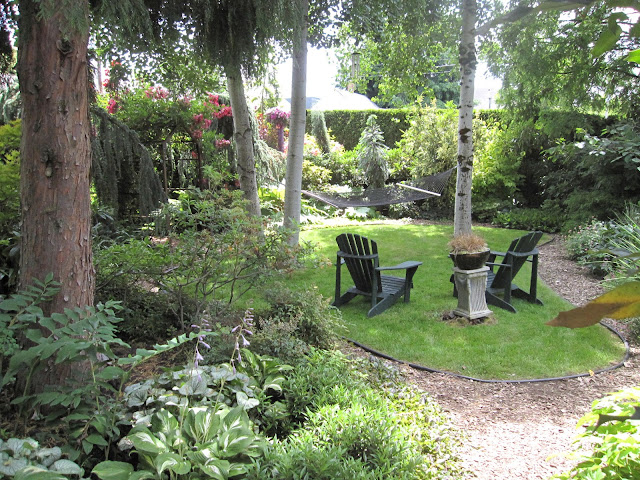 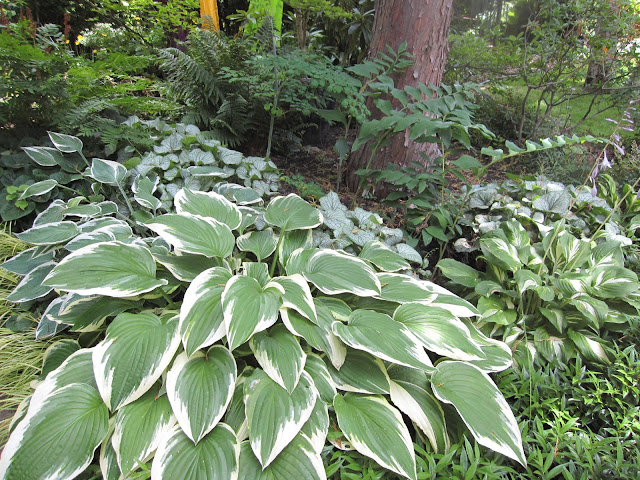 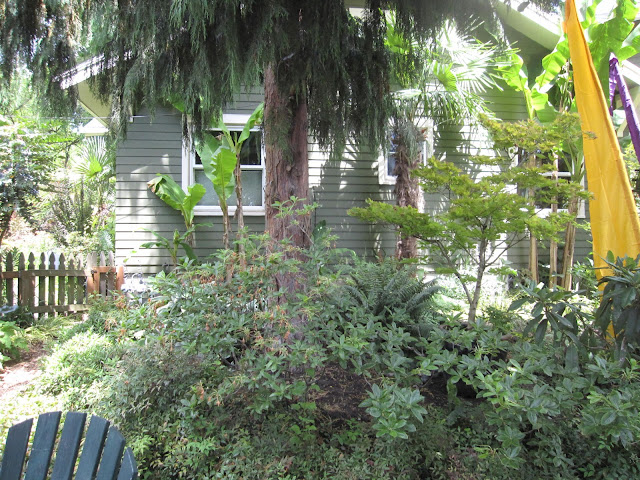 Looking northeast from this area was a colorful trio of fabric flags. Some years ago, the garden lost a large cedar and the resulting vertical space needed filling. 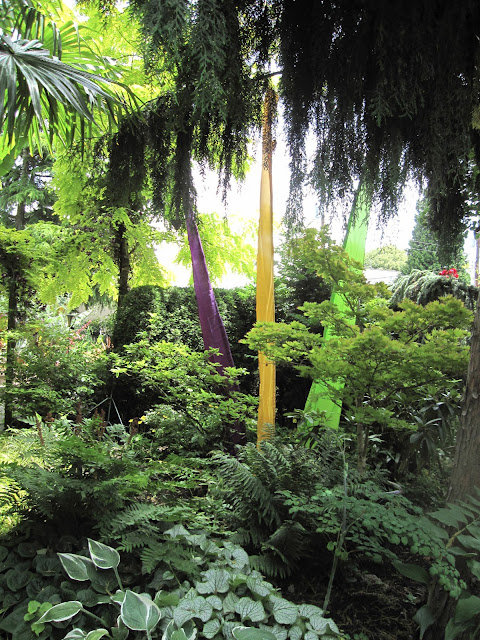 Up closer, you can see how the colors of the pennants echo the colors of the purple clematis winding through a golden ash behind them. There was plenty of golden and chartreuse foliage in this garden, and nice use of contrasting colors everywhere. 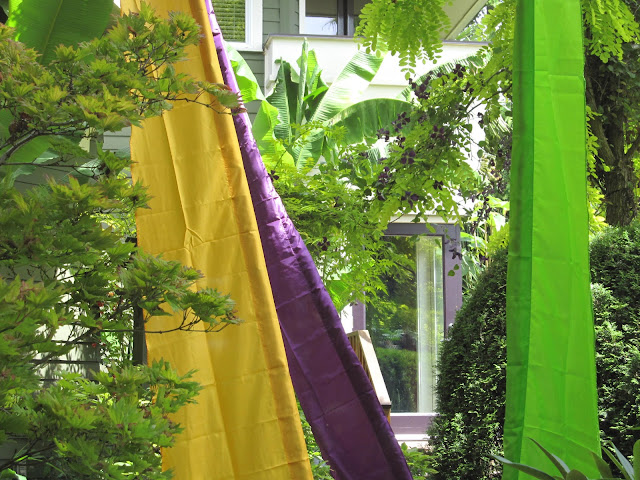 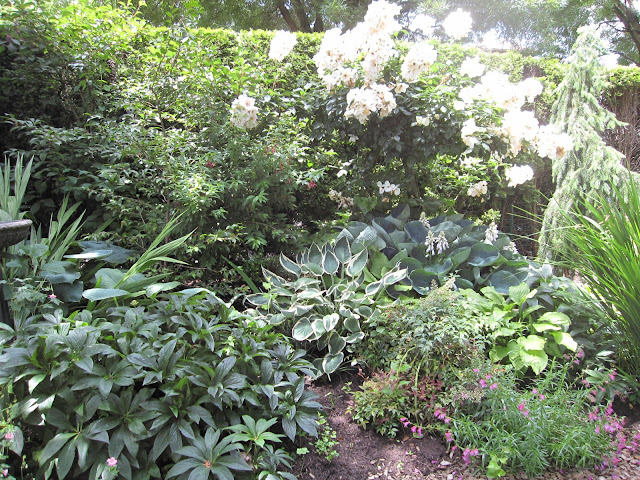 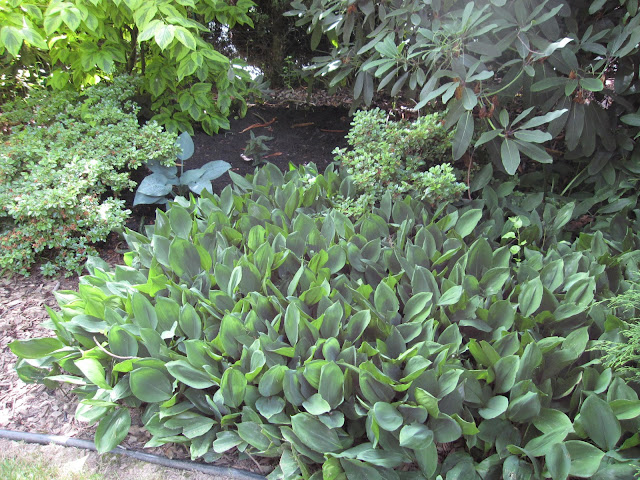 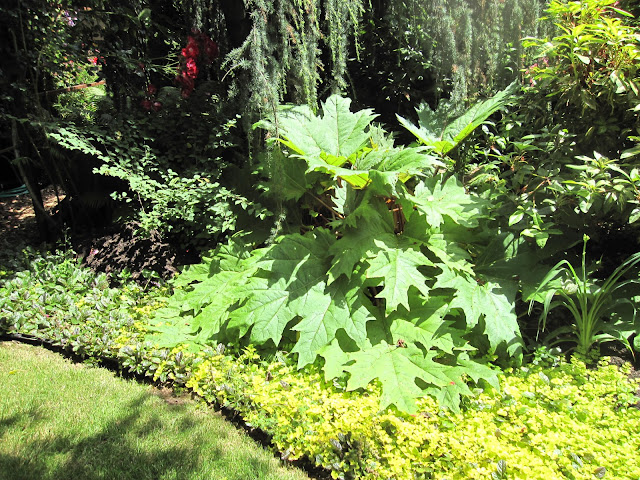 I was transfixed by the extraordinary variegation and color of Cornus 'Heronswood Gold'. It was gorgeous! 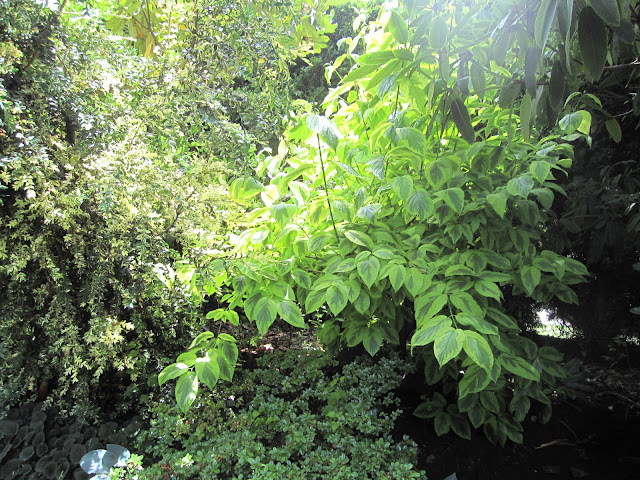 A big change in focus became evident as I looked east through an arbor into a formal rose garden and central fountain. 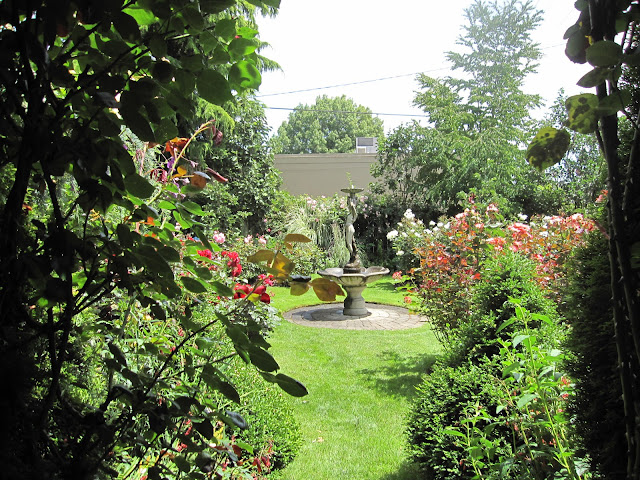 Roses, hydrangeas and grasses lined the sides of the paths. 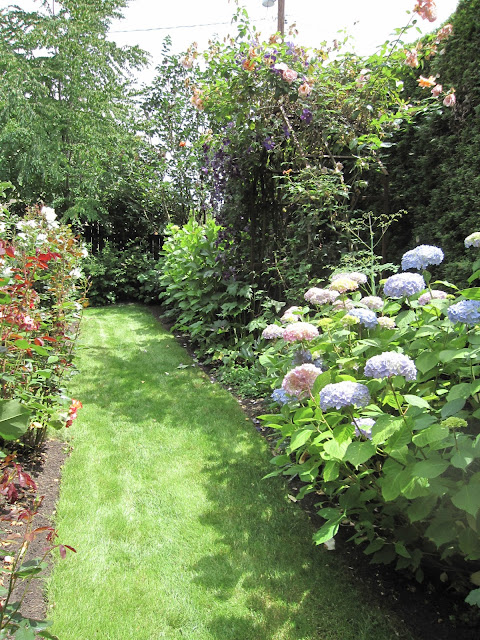 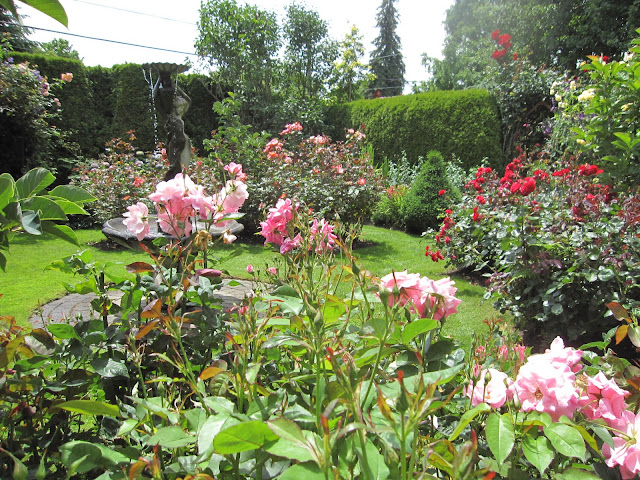 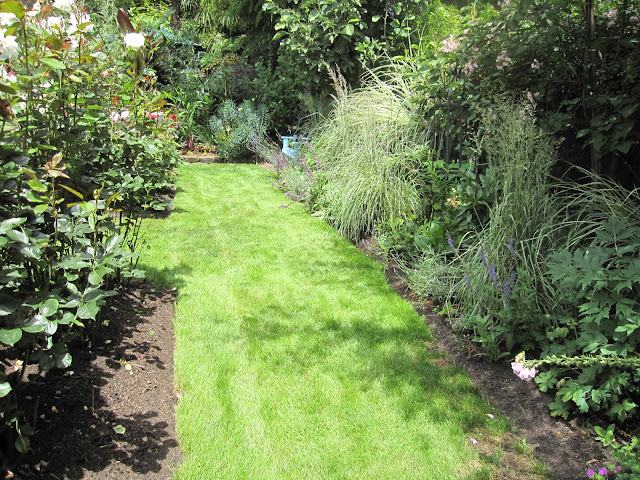 Approaching the rear of the house more tropicals and sun-lovers were massed in and around the slate patio, enjoying the extra heat. 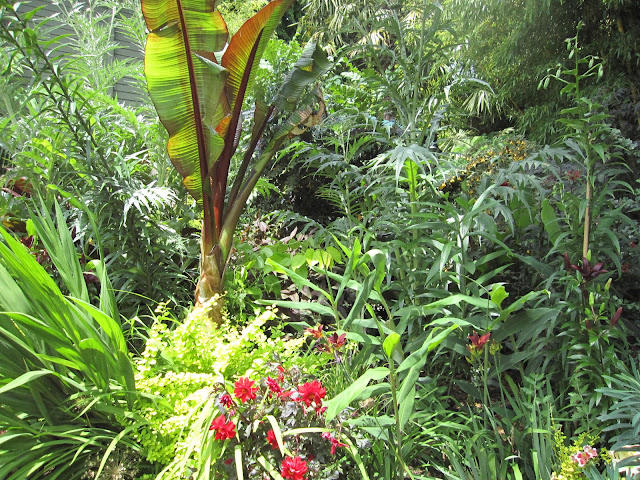 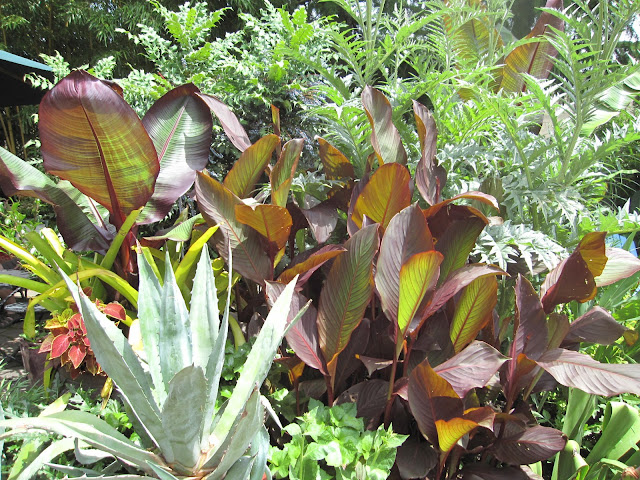 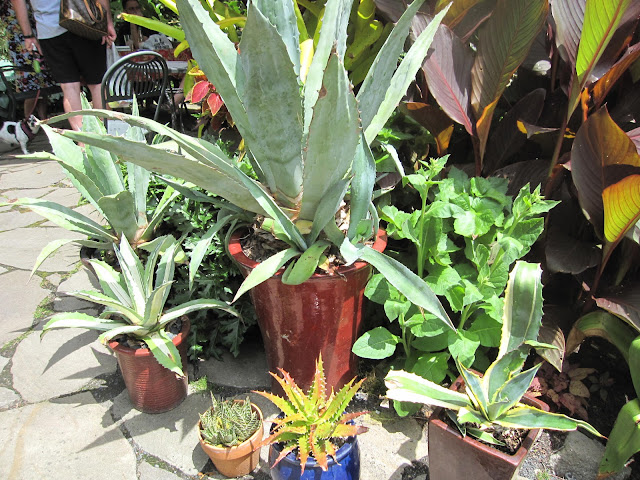 I believe Peter identified this Mahonia as 'Arthur Menzies'. 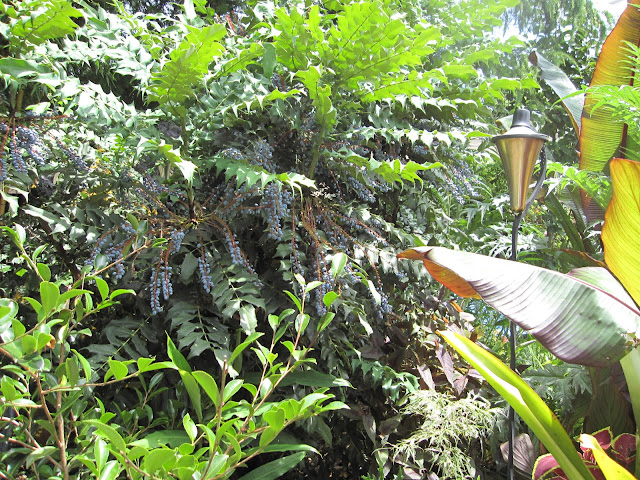 Looking west, you can see the beautiful golden-green foliage of the ash I showed earlier. Peter specifically planted this fast grower as a support for the clematis. 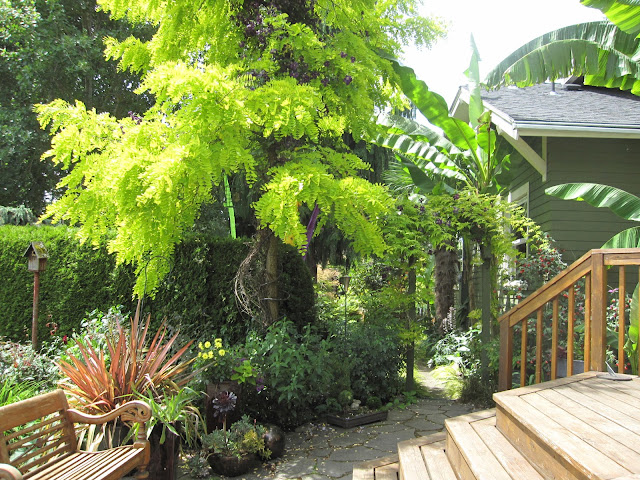 Due to a sizable addition to the house in 2001, this part of the garden was more compact. Choice plants were tucked in beside the house and along the patio, where an umbrella added some shade for dining. 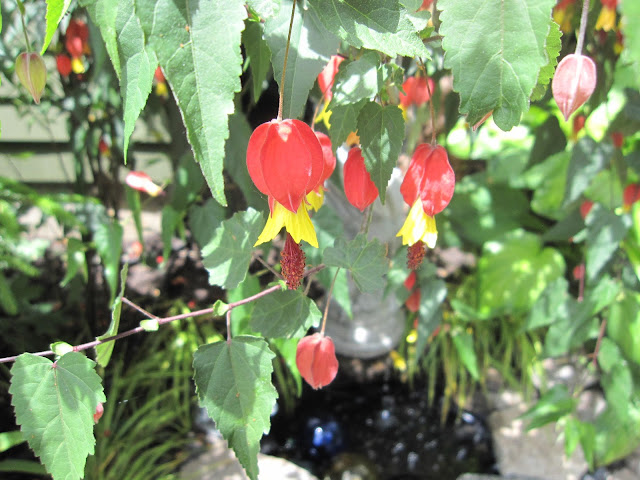 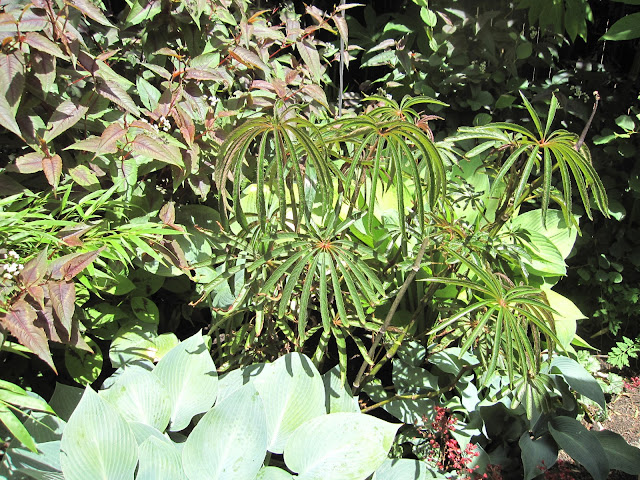 Here are the mature palms from which the young ones in the front garden came, along with timber bamboo to help privatize against the expected increase in development on Mississippi behind them. 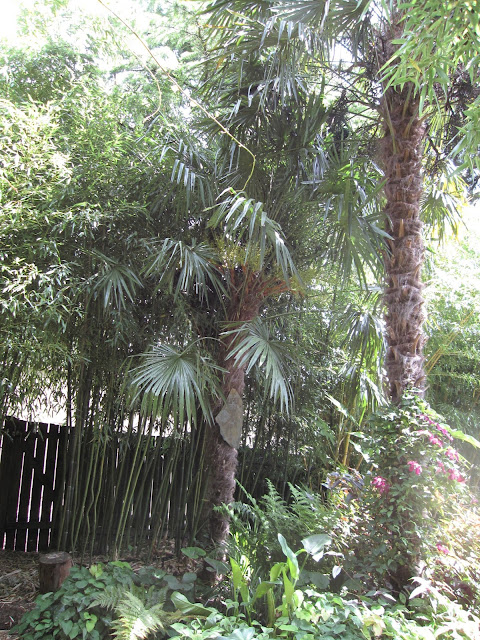 A last look back to the south across the garden. 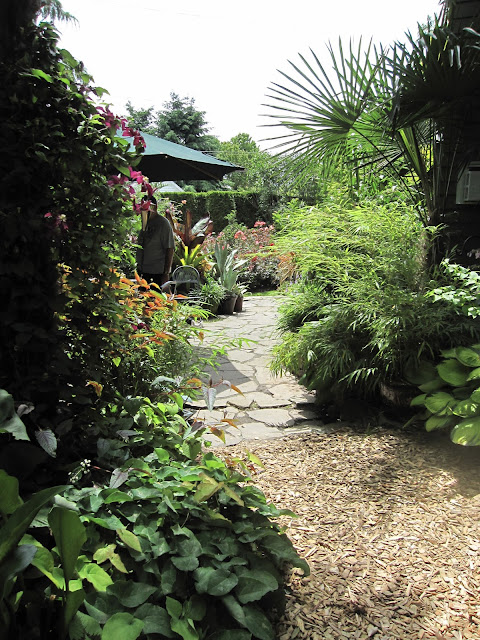 In trying to figure out what appeals to me so much about this and other smaller gardens, I concluded that it's the achievable scale of the designs and the sense that these gardeners have many of the same conditions and limitations to deal with as I have. Beautiful small gardens like this allow me to feel that their luxurious and calm spaces are something I can aspire to create in my own garden at Longview Ranch. Just give me twenty years or so.