For most attendees of a garden show, display gardens are a big reason they go. I am definitely in that camp, and I have to say some of the designers outdid themselves this year. For some reason, I was actually prepared to be underwhelmed by the display gardens, but NO!

The several visually lush, but elementally simple gardens were my favorites among the over 20 gardens. I spent a little while talking to Karen Stefonick, the designer of this garden, "A Wrinkle in Time." 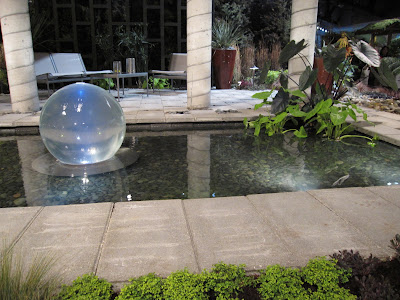 We discussed the value of repeating elements to achieve rhythm, and she mentioned that there were only about twenty different plants used in the entire garden. 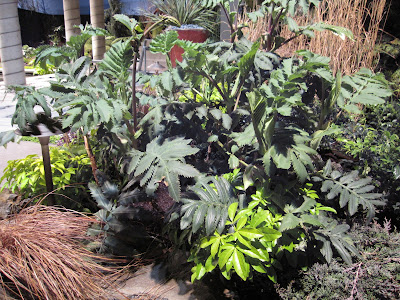 Karen used a new introduction of Melianthus major 'Antonow's Blue', pairing it with what I'm guessing is Choisya ternata 'Sundance' for a fabulous color contrast. 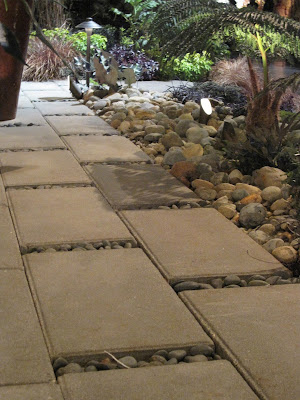 The simple, geometric shapes of the pavers add to the garden's appeal, while the alternating layout and river rock filler keep it from feeling stiff. 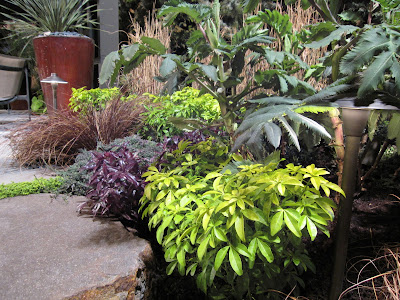 More Melianthus and Choisya, with something purple in there for more contrast. 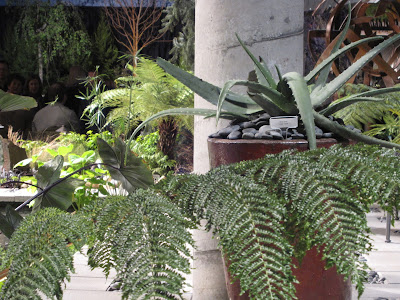 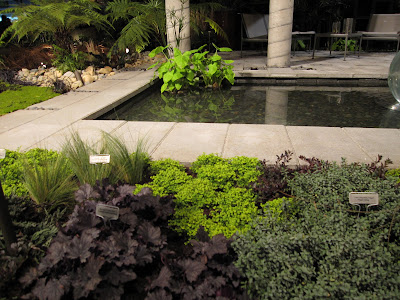 The front of the garden used golden spike moss and dark purple heuchera for color impact, with some type of low grass for great textural contrast. I also spotted bright green and dark purple colocasias in the pond. 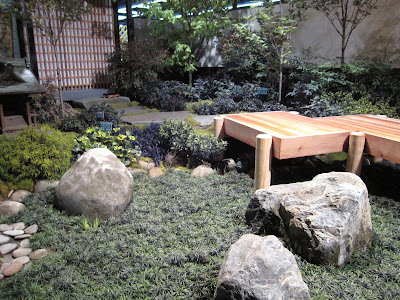 "The Japanese Garden" was designed by the Arboretum Foundation to celebrate the 50th anniversary of the Seattle Japanese Garden. I love this kind of serene eastern style. The huge boulders and sea of green mondo grass just drew me in. 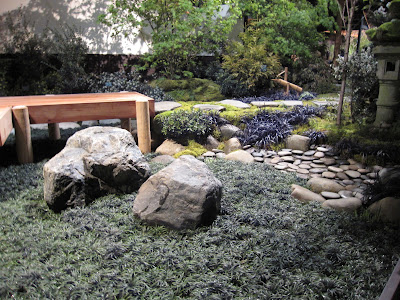 This garden appeared to have even fewer than the aforementioned 20 plants, but the designers used their limited plant palette with beautiful results. 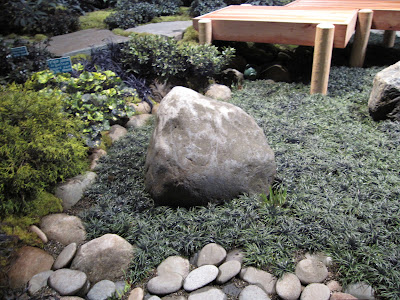 I like the use of rounded flat rocks and irregular pavers. It's a very different approach from the first garden, but equally successful. 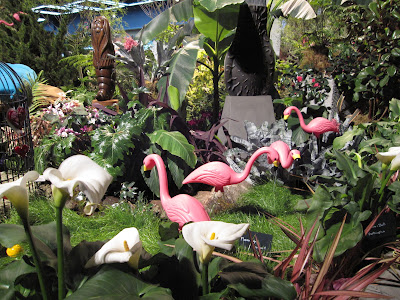 And now for something completely different: This garden, "Alice's Labyrinth", was over-the-top color and craziness in one place. But it had pink flamingos in it, so how could I hate it?! 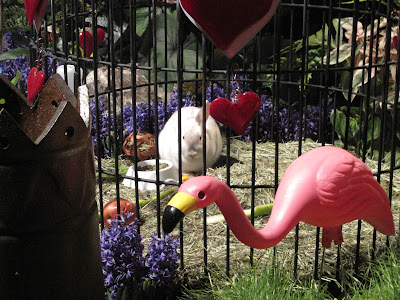 The designers even included a white rabbit. 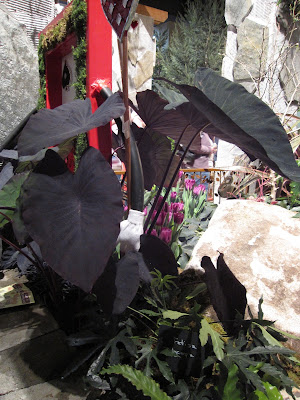 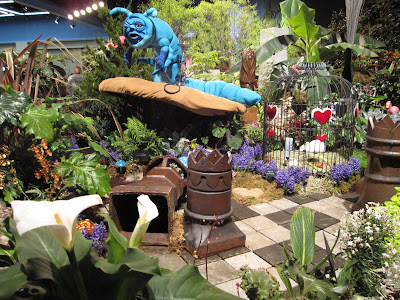 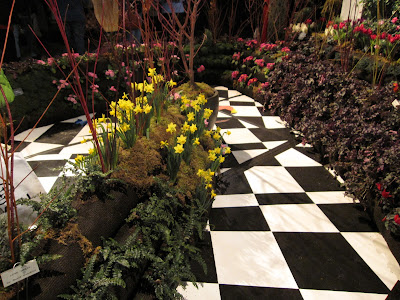 The 'labyrinth" was created from long fabric tunnels filled with something mulchy and pocketed with all kinds of small plants. It was Wooly Pocket on steroids. 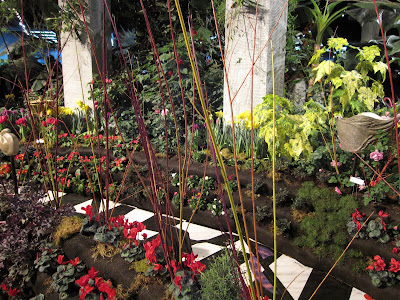 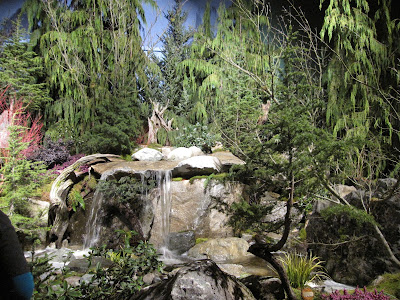 If you click on this small picture to enlarge it, you can better appreciate "Stepping Through a Timeless Tranquil Forest" and the scale of this garden with its amazing waterfall.

Then there were a few little details that caught my eye. 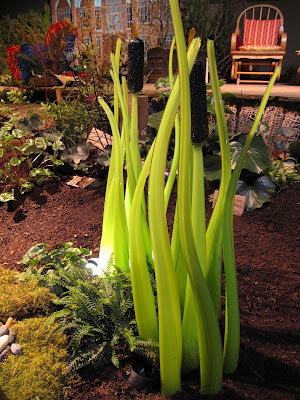 This green glass cattail sculpture was about two feet high and lit from underneath. It was in The Wind in the Willows garden. I'd be happy to have this in my garden. 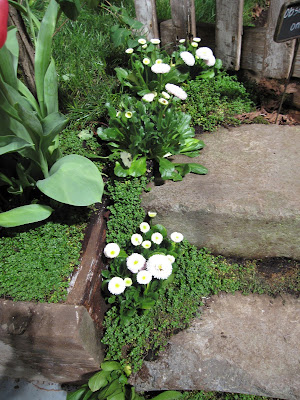 In another garden, English Daisies and Babies Tears had been carefully tucked into the corners of the steps. The cottage garden isn't really my style, but this garden was so nicely thought out and finished, it was a delight. 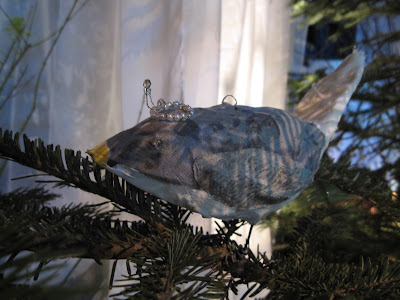 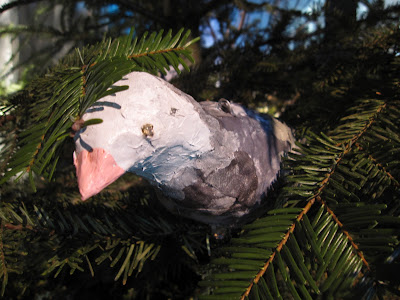